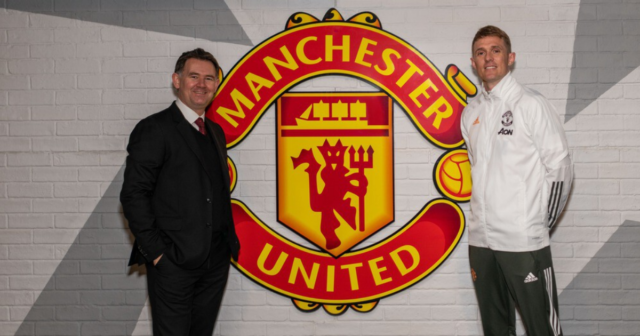 MANCHESTER UNITED are set to appoint a deputy to football director John Murtough, according to reports.

The Red Devils are aiming to modernise their model behind the scenes, having appointed Murtough and technical director Darren Fletcher last year.

John Murtough, left, serves alongside Darren Fletcher behind the scenes at Man United

Murtough has taken on a heavy volume of work, with many different department chiefs reporting back to him.

According to The Athletic it has become apparent that Murtough’s work load is too high, and that he needs help.

They claim that United have begun the process of recruiting a new deputy football director – as they look on enviously at the set-ups of other Premier League clubs.

United have reportedly already started interviewing candidates for the role, although there is no timeframe on when an appointment will be finalised.

The appointment could potentially be delayed by a preferred candidate having to serve a notice period at another club.

United will have plenty of big decisions to make in the coming months – not least who will succeed Ralf Rangnick as manager when the current interim steps into a consultant role.

In addition to this they will have to work out what to do with players currently on expiring contracts, with the likes of Paul Pogba, Jesse Lingard and Edinson Cavani having all entered their last six months.

Man United are expected to look to sign a central midfielder and striker this summer.

The Red Devils are looking to emulate behind the scenes models used at Brighton and Liverpool.

Prior to his resignation last week, the Seagulls had Dan Ashworth serving in a similar role to Murtough, with former Scotland and Rangers ace David Weir working as his No2.

Similarly at Anfield, the Reds have assisted outgoing Michael Edwards with his successor Julian Ward.