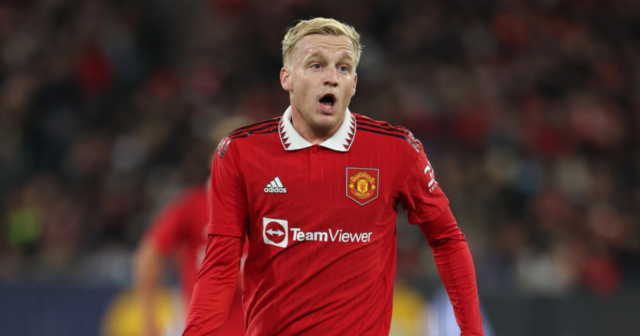 The Algerian midfielder is thought to want to leave AC Milan this summer, with the Red Devils already being linked with a swoop.

The Red Devils are keen on Bennacer, who is open to leaving AC Milan this summer

And now United are exploring the possibility of sending Van de Beek to Milan as part of an exchange, according to Calciomercato in Italy.

It’s claimed the Red Devils are keen for a “discount” on Bennacer, and could offer Van de Beek plus a small fee in order to secure his services.

Bennacer, 24, is valued at £38million by the Serie A outfit.

The Dutch pair previously worked together at Ajax, with Van de Beek playing a vital role in the side that reached the Champions League semi-finals in 2019.

United though are claimed to be keen on Bennacer, who has also been linked with a switch to Arsenal.

The Algerian international won the Serie A title with AC Milan last season, playing 40 times in all competitions.

His form, combined with his desire to leave San Siro, has sparked interest from the Premier League,

De Jong meanwhile has struggled at Old Trafford ever since his switch to the Prem in 2020.

The 25-year-old was even sent out on loan to Everton in the second half of the last campaign.

And things weren’t much better for him at Goodison Park.

There had been hope that Ten Hag’s arrival could spark the midfielder back into life and help him rediscover his best form.

But United’s desire to sign Bennacer could see Van de Beek make way for the Algerian at Old Trafford.