Man Utd set to snap up Marc Jurado, 16, on free transfer after defender confirms he is quitting Barcelona
Advertisement 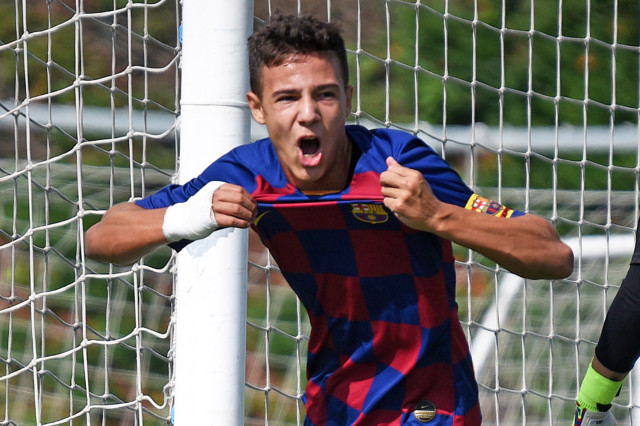 MARC JURADO has bid farewell to Barcelona as his free transfer to Manchester United draws closer.

The 16-year-old wonderkid announced on Instagram he will be leaving the Nou Camp after nine years with the club.

He wrote: “It’s never easy to leave a team that has given you everything. FC Barcelona has been my second home, my second family, where I have developed as a player and as a person.

“Today it’s time to say goodbye, but not before expressing my gratitude to each of the people who have helped me since I started in the prebenjamín in the year 2011.

“I have been lucky to share my passion with a fantastic generation, with which I will always be linked.”

The right-back has been heavily linked with a move to Old Trafford and it emerged last month he agreed personal terms with United.

Barca desperately tried to keep the defender in their famous La Masia academy, but the offer from Manchester proved too good to turn down.

He has decided to try his luck in England despite still being a teenager – just like Cesc Fabregas and Gerard Pique.

Nou Camp chiefs were confident of keeping Jurado tied down to the club after seeing fellow prospects Ansu Fati and Ilaix Moriba commit to new deals.

However, United are now toasting the capture of the highly-rated prodigy as Ole Gunnar Solskjaer looks to invest in youth and bring back the glory years to Old Trafford.

But they will have to pay a compensation fee to Barca as he has been with the club since the age of seven, though £200,000 can prove to be a bargain for touted rising star.

Jurado added in his post: “We started as boys who just wanted to run after a ball and I say goodbye, nine years later, calling them friends.

“Only we know the immense luck we have had with all the coaches who have developed us and helped us to keep fulfilling our dreams.

“Every stage has a beginning and an end. Mine, having reflected a lot with my family, has come. I leave behind unforgettable memories which will always stay with me.”