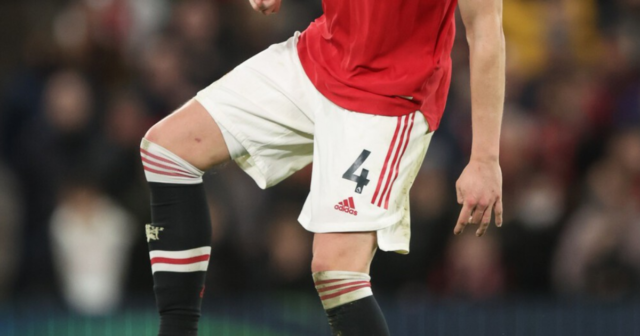 MANCHESTER UNITED want a staggering £15million for Phil Jones, according to reports.

That’s despite the defender playing just one game in the last two years.

Phil Jones, 29, has played just one game in two years for Man Utd but is wanted by Newcastle United and Burnley

Newcastle and Burnley are said to be interested in the former England man, who made his long-awaited return against Wolves earlier this month.

But it seems they won’t be able to get Jones, 29, for cheap despite his extensive injury woes.

The centre-back isn’t believed to be in Ralf Rangnick’s long-term plans.

But the Daily Star say the German will still demand £15million from his suitors.

Jones impressed in his first game in two year despite United losing 1-0 against Wolves.

He had not featured for United since his side’s 6-0 drubbing of Tranmere Rovers in the FA Cup in 2020.

Newcastle have reportedly approached United as the Toon Army look to add resources for their relegation battle.

The Geordies can afford the asking price but Burnley, also said to be mounting an offer, are being put off by Jones’ £100k-a-week wages.

The versatile player has gone on to win the Premier League, FA Cup and Europa League with the North West club.

He now has less than 18 months left on his contract at Old Trafford and United could look to cash in, striking whilst the iron is hot.

There may be wholesale changes in Rangnick’s first transfer window as interim manager and superstar Paul Pogba is facing an uncertain future in Manchester.