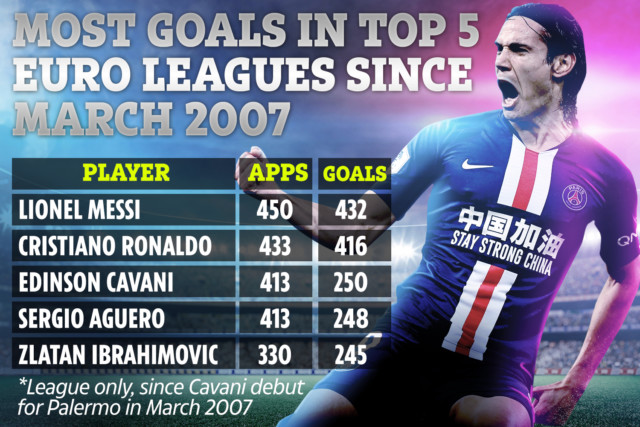 EDINSON CAVANI is so lethal in front of goal that only Lionel Messi and Cristiano Ronaldo have scored more than him since he made his debut.

In the top five European league since March 11 2007, the new Manchester United striker sits third on the list of goals with 250.

But it is a big gap to the rivals considered by many to be the top two footballers ever.

In that time, Juventus ace Ronaldo has scored 416 while Barcelona star Messi – who came close to joining United rivals City this summer – is top on 432.

Incredibly, their goal tally comes in only slightly more games than Cavani’s.

The Uruguay hitman’s 250 tally comes from 413 games, while Ronaldo and Messi needed 433 and 450 respectively to reach theirs.

Crucially though, Cavani, whose career has included stints with Palermo, Napoli and Paris Saint-Germain, is doing better than Sergio Aguero.

The Etihad frontman – currently training alone as he continues his recovery from injury – has two fewer goals from the same number of games as Cavani.

And former United star Zlatan Ibrahimovic trails them both, with 245 goals from his 330 games since Cavani made his debut.

The most goals of 33-year-old Cavani’s career came during his time in the French capital. 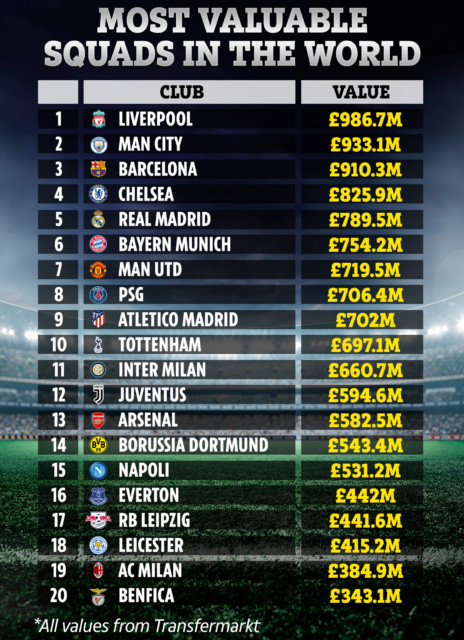 Liverpool boast the most valuable squad in world football

But the most prolific spell came during his three years at Napoli – first on loan from Palermo then as a permanent star.

Cavani amassed a total of 34 in 109 games for Palermo.