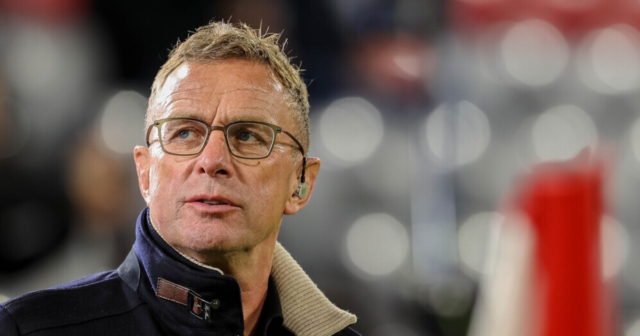 MANCHESTER UNITED are sweating over the appointment of Ralf Rangnick with Russian club Lokomotiv Moscow yet to grant him permission to leave.

The 63-year-old joined the side in the summer on a three-year deal as their Head of Sports and Development.

But the former RB Leipzig gaffer has since reached an agreement with the Red Devils to take charge on an interim basis until the end of the season.

United have been keen to bring in a new manager after they sacked Ole Gunnar Solskjaer following the 4-1 away defeat at Watford.

However Lokomotiv are yet to release Rangnick from his contract in order to allow him to make the move to England.

United are now waiting for that to happen before swiftly bringing him to the Theatre of Dreams.

SunSport also understands that Rangnick is in talks with United about his long-term future at the club after his interim spell.

Former Lokomotiv president Nikolai Naumov has labelled Rangnick as a ‘merchant’ who only cares about money, as the German looks to link up with United.

In an incredible rant to Match TV, Naumov claimed: “It’s not about Manchester. For Rangnick, this is no escape, betrayal, or disgrace. Rangnick is a merchant.

“He absolutely does not care about football, because he only does business around him.

“And the more countries, leagues and football clubs he covers, the more he will earn.

He’s absolutely indifferent to Lokomotiv. He did not come here to raise football, but to earn money.

Now he was offered money elsewhere, and he and his company will go to United.

“When he’s offered to work in Africa, he will go to earn money there, leaving his deputy at Manchester United. Clean business.”

Though Liverpool boss Jurgen Klopp has lauded his compatriot, as he described Rangnick as an ‘organised and experienced coach’.

When asked about his possible arrival, he said: “Unfortunately a good coach is coming to England, to Manchester United!

“Man United will be organised on the pitch. That’s obviously not good news for other teams.”

Should he take the reins at United, the likes of Jesse Lingard, Donny van de Beek and Jadon Sancho could benefit from a run of games in the starting XI.