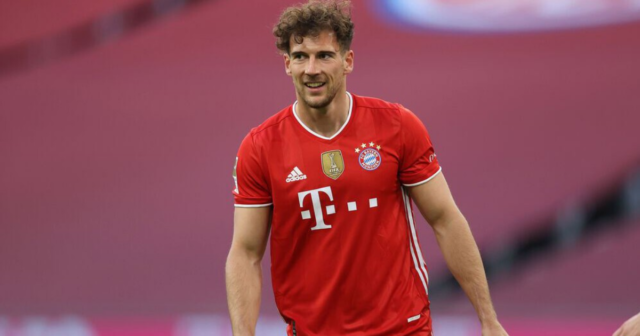 MANCHESTER UNITED have suffered a blow in their pursuit of Bayern Munich star Leon Goretzka after the German side’s boss Julian Nagelsmann revealed he is ‘confident’ the midfielder will extend his contract beyond 2022.

Goretzka, 26, who currently has just one year left on his deal, joined the Bundesliga champions from Schalke in 2018 and his performances have caught the eye of those at Old Trafford.

Goretzka looks set to stay with the German champions

And with the future of Man Utd midfielder Paul Pogba uncertain, Ole Gunnar Solskjaer is looking to line up a replacement.

But Nagelsmann’s recent comments have dampened the Red Devils’ hopes of luring Goretzka to the Premier League.

Speaking about the midfielder’s situation, the Bayern manager said: “I’m not involved enough that I have a say every day. I stay out of these issues.

“Of course I have talked to him about my plans for him. I’ve told him I’d be happy if he extended and I’m also confident.

“There are several topics involved when it comes to discussing a contract extension.

“I’ll continue to focus on the sports side of things and show him he can be one of the most dangerous midfielders in Europe. He has potential to get even better.”

Since joining three years ago, Goretzka has played 112 times for Bayern, scoring 25 goals.

He has won the Bundesliga title in all three seasons at the Allianz Arena and also claimed the Champions League with the German giants in 2020.

Solskjaer’s men have already shown their intent in the summer transfer window with the signing of £73million man Jadon Sancho.

They are also closing in on securing Real Madrid centre-back Raphael Varane, with a deal already agreed in principle.

Man Utd are looking to mount a Premier League title challenge this season and close the 12 point gap to rivals Manchester City.