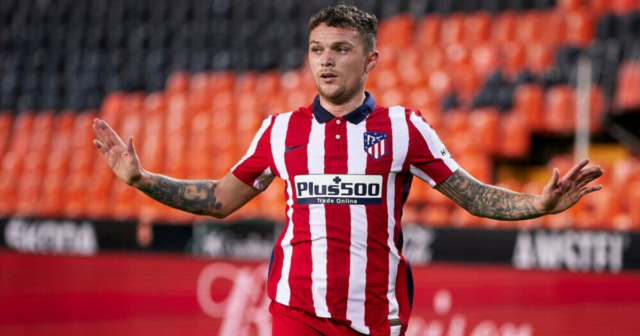 ATLETICO MADRID right-back Kieran Trippier is reportedly willing to wait until the end of the window to complete a move to Manchester United.

The 30-year-old has been linked with a return back to the Premier League having entered the final year of his contract at the Wanda Metropolitano.

And SunSport understands that the Red Devils are determined to secure his services to provide competition for Aaron Wan-Bissaka.

According to the Telegraph, Trippier is prepared to wait until the August 31 transfer deadline to secure a switch to join the Red Devils.

They state that Trippier is keen to move back to the North West of England with his family still living there.

The news outlet adds that the ex-Tottenham defender is aware United will have to sell players in order to fund a bid for him.

It is believed that Atletico value the former Burnley man at £30million after he helped Diego Simeone’s side win the LaLiga title.

United have already splashed around £120million to bring Jadon Sancho and Raphael Varane to the Theatre of Dreams.

Ole Gunnar Solskjaer believes that Trippier would offer an added threat from set-pieces due to his abilities from dead-ball situations.

And with Diogo Dalot and Brandan Williams facing an uncertain future at United, Trippier could become the next high-profile arrival at Old Trafford.

QPR striker Charlie Austin has declared that United are in need of a new right-back as he questioned Wan-Bissaka’s defensive qualities.

He told talkSPORT: “Although Manchester United have signed [Raphael] Varane, their biggest problem is they need a right-back.

“Aaron Wan-Bissaka is not up to the [required] quality.

“We played them the other day, and I know it was only a pre-season, but they need to go all out for Kieran Trippier.

“That’s who they’re crying out for. Aaron Wan-Bissaka can’t defend.