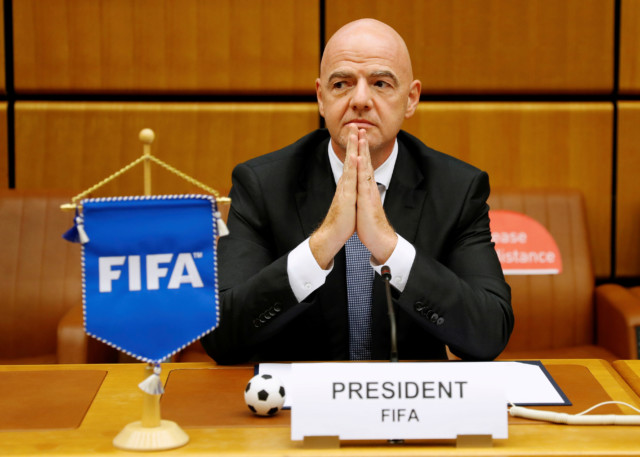 GLOBAL football chiefs have slammed the door shut on plans for a breakaway European Super League.

Liverpool and Manchester United were claimed to be part of the cabal seeking to set up their own competition, allegedly with the support of Fifa.

Real Madrid President Florentino Perez has been the ringleader of the plotters, regularly talking up the concept.

But the Euro giants have now been warned they will find themselves banned from domestic leagues if they joined any breakaway.

And players will be banned from taking part in the World Cup, European Championships or South America’s Copa America if their clubs were among the rebels.

Uefa are expected to confirm the details of the new-look Champions League to take effect from the 2024-25 season in the next few months.

That is a response to the threats from the continent’s biggest clubs about setting up their own money-spinning competition.

And a clear and aggressive warning shot, issued by Fifa President Gianni Infantino, Uefa counterpart Aleksander Ceferin and the heads of the other Confederations, potential mutineer clubs were told they and their players would become pariahs if the plans became reality.

The statement said: “In light of recent media speculation about the creation of a closed European ‘Super League’ by some European clubs, FIFA and the six confederations once again would like to reiterate and strongly emphasise that such a competition would not be recognised by either FIFA or the respective confederation.

“Any club or player involved in such a competition would as a consequence not be allowed to participate in any competition organised by FIFA or their respective confederation.”

The same would apply to domestic leagues, including the Prem, which fall under the remit of the FA and therefore Uefa.

Some lawyers have argued that Fifa does not have the right to restrict clubs or leagues from organising their own competitions.

But Fifa are also recognised as the sole worldwide governing body for the game, with the Confederations and national associations operating under Zurich’s control.

The joint statement added: “As per the FIFA and confederations statutes, all competitions should be organised or recognised by the relevant body at their respective level, by FIFA at the global level and by the confederations at the continental level.

“The universal principles of sporting merit, solidarity, promotion and relegation, and subsidiarity are the foundation of the football pyramid that ensures football’s global success and are, as such, enshrined in the FIFA and confederation statutes.

“Football has a long and successful history thanks to these principles. Participation in global and continental competitions should always be won on the pitch.”

And in a clear and deliberate pincer movement, the European Leagues umbrella group, representing the domestic competitions, dismissed the idea of “a closed European Super League for a limited number of clubs similar to those franchise models operating in North America”.

“We are determined to protect the existing model and how football is organised in Europe and the way the industry works for professional football.

“All Football Associations and Professional Leagues in Europe are recognising and following FIFA and Confederation statutes, and this will guide us in our actions to stop this initiative.

“If the initiative is put in motion, we will coordinate our measures with UEFA, FIFA and the Confederations.”