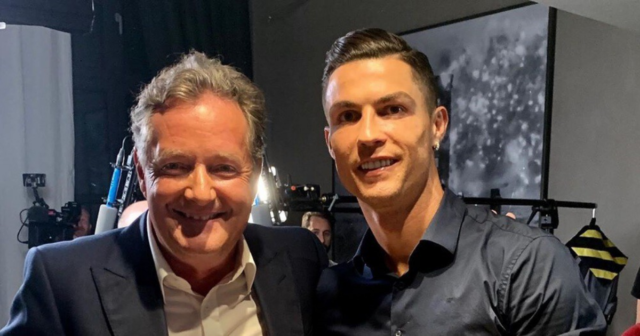 The Portuguese superstar, 36, hit out at today’s young players in a revealing interview earlier this week.

“But I can give an example. If I give you advice, even if you are younger than me, if you don’t implant that during your daily life, it will be difficult.

“I can speak all day with that person, but if it’s not coming from inside of you, it’s impossible.

“I remember, when I was 18, 19, 20, some older players spoke with me. But I put that as ‘Cristiano, you have to improve – they know more than you, they are more experienced than you, they passed through many bad moments’.

“But other people, they don’t accept that, if you criticise them.”

Now Morgan, who is an Arsenal fan and friends with Ronaldo, has responded to the interview.

“If United’s whole squad had Ronaldo’s mentality, they’d win everything.

“But they don’t – too many overpaid younger prima donnas strutting around like they’re football gods when their records aren’t fit to lace Cristiano’s boots.”

Ronaldo has netted 14 goals in 21 games for Man Utd so far this season – including some key late strikes in both the Premier League and Champions League.

Yet despite his goalscoring form, the former Real Madrid and Juventus man has failed to keep United towards the top end of the table.

Ralf Rangnick’s men sit seventh in the Prem with just nine wins from 19 games so far this season.

And Ronaldo has urged those who do not want his help to step up and start doing their job.

“We are here to help and if they need my help, and my support and my advice, I will be the No1 to help,” he said.

“But if you don’t want my help, do your job, look for yourself, and do your best to help the team.”