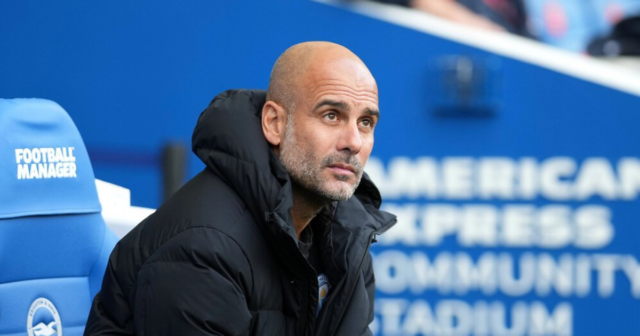 The Premier League champions attacked at their fluid best, with Phil Foden in particular delivering another incredible performance.

City lined up with Gabriel Jesus and Jack Grealish on the flanks and Foden playing down the middle – after failing to sign Harry Kane in the summer following Sergio Aguero’s exit.

Asked by Sky Sports’ Patrick Davison if City’s display proved that they didn’t actually need a new striker, because of their ‘extra fluidity’, Guardiola said: “Sky. I’m going to tell you something.

“When one day we are going to lose a game, you will ask me if I miss the striker.

“I bet you whatever you want.”

With a menacing he grin, he added: “I don’t buy this question, I’m sorry.”

Ilkay Gundogan opened the scoring, before a quickfire Foden double put rampant City 3-0 up after 31 minutes.

Brighton were better in the second half, and managed to pull a goal back through Alexis Mac Allister, before Riyad Mahrez added gloss to the scoreline in stoppage time.

On Foden specifically, Guardiola told the BBC: “In the final third he can play up front, has the quality to move and be aggressive one on one and arrive in the box.

“He can play as a false nine, a winger, wide right or wide left.

“He is a guy who is a midfield player with a big sense of the goal. He is still young and still has a margin to improve.”

Did you miss our previous article…
https://www.sportingexcitement.com/football/premier-league/man-utd-legend-cristiano-ronaldo-reveals-why-he-dodged-initiation-song-and-made-a-speech-instead-on-return-to-club