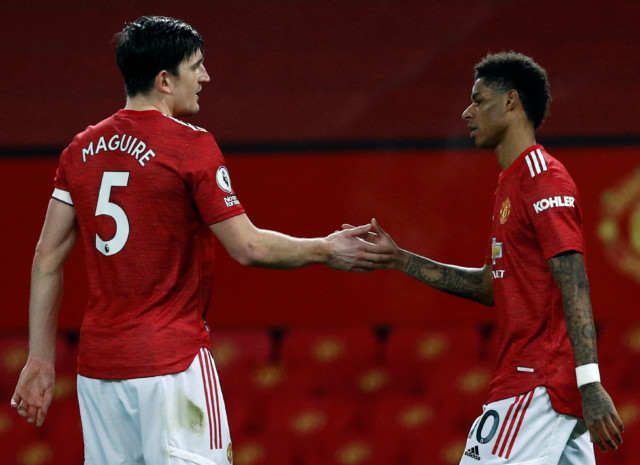 MANCHESTER UNITED captain Harry Maguire struggled to contain his frustrations last night as he and Marcus Rashford became involved in an X-rated bust-up.

And it reportedly led to the England striker responding by calling his skipper a ‘f***ing k***head’.

The Red Devils were held to a goalless draw by Crystal Palace – a third straight stalemate – to effectively end their title hopes.

And that led to tempers flaring between the skipper and forward.

The angry on-pitch verbals came when Maguire showed his frustration as Rashford was flagged offside.

The forward asked: “What do you want me to do?”

An irate Maguire then replied: “F*****g get back onside!”

However, Rashford was having none of that and he let rip at the experienced former Leicester City centre-half.

The pressure of a hectic run of games appears to be finally showing throughout the United squad.

They have now gone almost five hours – 285 minutes – without a goal.

And former right-back Gary Neville said on Sky Sports: “It’s a really poor performance, let’s be clear about it. They’re so bad.

“The touch from Marcus Rashford in the second half has been awful. He can’t control the ball when it comes to him at the moment.”

Did you miss our previous article…
https://www.sportingexcitement.com/2021/03/04/liverpool-vs-chelsea-live-stream-tv-channel-kick-off-time-and-team-news-for-premier-league-showdown-at-anfield/