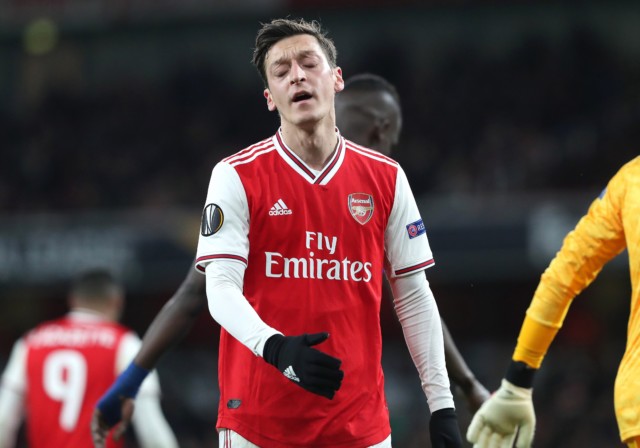 MESUT OZIL’S agent has thrown cold water over speculation of a move away from Arsenal this summer.

Mesut Ozil has failed to impress for the Gunners this season

The midfield maestro has fallen out of favour in North London, not making a single appearance since the Premier League restart in June.

And he has been linked with a transfer away from the Gunners, amid interest from Turkish side Fenerbahce.

But Ozil’s agent Erkut Sogut, is quoted by Fanatik, telling futblogiant: “I do not think there will be a change in the case of Mesut Ozil until the summer of 2021.

“He has a contract. There is no change. He will remain in Arsenal.

Ozil has been rotting on the bench in recent weeks reportedly due to back soreness and the midfielder is not expected to feature in the FA Cup final clash with Chelsea.

Fenerbahce want to try and seal a loan move for the 31-year-old, but can only afford to contribute a fraction of his wages.

They are prepared to pay £2.7million of Ozil’s salary a year, but he pockets around £18m annually.

The German ace reportedly wants to honour the rest of his deal but his ex-Miss Turkey wife is believed to be pushing for her husband to accept the proposal from Istanbul.

Erdogan is a pal of the Gunners midfielder and was best man at his wedding 13 months ago.

He is keen to see Ozil playing his football in Turkey and the Gunners ace himself has indicated he would be open to moving to the country due to his Turkish heritage.