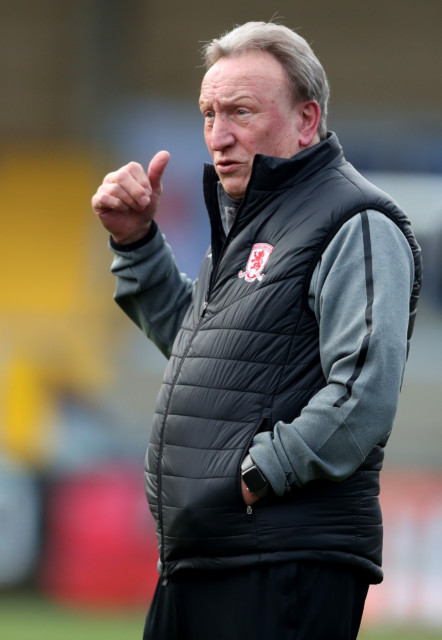 MIDDLESBROUGH face sending out a team of kids in the FA Cup third round against Brentford after a number of positive Covid tests.

The Teessiders training ground has been closed since Monday, leaving Neil Warnock’s side unable to prepare for Saturday’s clash with the Bees.

As things stand, Boro expect the game to go ahead but at best look like naming a decimated team made up of the U23s.

But they could be forced to seek a postponement if the number of positives increases substantially.

In addition to a number of players being struck down by Covid, Boro boss Warnock is already without Jonny Howson, Ashley Fletcher and Grant Hall through injury.

In more positive news, the club confirmed this morning that Duncan Watmore has signed a new two-and-a-half year deal at the Riverside.

The winger, 26, penned a short-term contract in November having left rivals Sunderland.

West Brom, Burnley and a clutch of Championship clubs were keen to tie him down after five goals in six games put Watmore in the running for the Championship’s Player of the Month award.

But Warnock said: “I don’t think it was ever in doubt that he would sign with us because he has loved every minute of it here so far.

“He’s a real good lad. We’re looking forward to having him here on a longer-term basis now and hopefully seeing him score plenty more goals for the club.”

Elsewhere, Shrewsbury are set to be booted out of the FA Cup after confirming they cannot raise a team to play Southampton on Saturday.

The League One Shrews revealed the scale of their Covid-19 crisis on Wednesday.

And now the FA has confirmed the planned third round tie is OFF – with the expectation that Saints will be awarded a walkover to round four.

In a statement, the FA said: “Shrewsbury Town FC’s fixture against Southampton FC in the Emirates FA Cup Third Round Proper will not be taking place on Saturday 9 January 2021 at 20:00 as scheduled.

“Shrewsbury Town FC informed The FA that there have been a significant number of positive COVID-19 cases at the club such that they did not have a sufficient amount of fit, non-isolating players who would be able to play in the fixture.

“Shrewsbury Town FC provided The FA with details of the medical advice it had received and its communications with local Public Health England and liaised with The FA’s COVID Medical Officer for the Emirates FA Cup.

Wembley’s Professional Game Board – which includes acting FA chairman Peter McCormick, plus representatives from Spurs, Brighton and Crystal Palace – will make a final decision on Shrewsbury’s fate “early next week”.