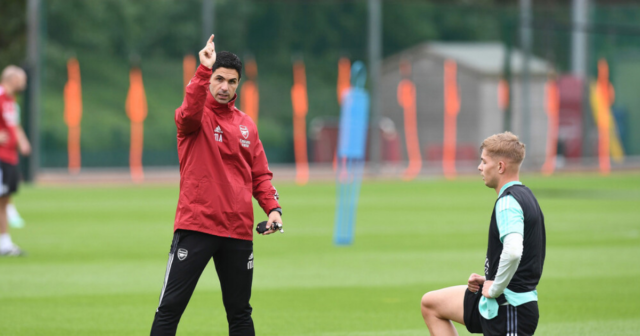 MIKEL ARTETA has confirmed some Arsenal stars are REFUSING to take up their coronavirus vaccinations – while admitting some are not yet double-jabbed.

The Gunners lost their Premier League season opener 2-0 at the hands of newly-promoted Brentford with FOUR players out following positive Covid tests.

Mikel Arteta was suggested some Arsenal players have refused to get their Covid jabsArsenal were without Aubameyang, Willian and Lacazette vs Brentford due to Covid with Nketiah also out with injury

Arteta was left baffled after the game in North London was allowed to go ahead.

Reflecting on the opening-day defeat lats Friday, Arteta said: “I was surprised, but the regulators decided the best thing to do was to play the game.”

Ahead of Sunday’s game against Chelsea, Arteta has now suggested some players are refusing their jabs.

The Gunners boss added: “Most of them are double vaccinated. Others have had one vaccine.

“We are trying to encourage them to get vaccinated, but it’s a personal matter.

“At the end of the day it’s a personal decision.”

However, Arteta did point out the importance of everyone getting their jabs.

Arteta was forced to start youngster Folarin Balogun up front against Brentford with so many first-team forwards injured.

However, the American-born striker struggled to have much of an impact.

Aubameyang, 32, could return for Sunday’s game at home to Chelsea after Arsenal confirmed he was the only player of the four to test positive before the Brentford game to now return a negative result.

The Gunners said on their website: “Aubameyang tested positive for Covid-19 and was unavailable for last Friday’s match at Brentford.

“Auba is now negative on Covid-19 testing, is well and following all protocols for return to play.

“He will return to training and be assessed prior to Sunday’s match.

“Alex (Lacazette) tested positive for Covid-19 and was unavailable for last Friday’s match at Brentford.

“Alex is still recovering and will not be available for Sunday’s match.”