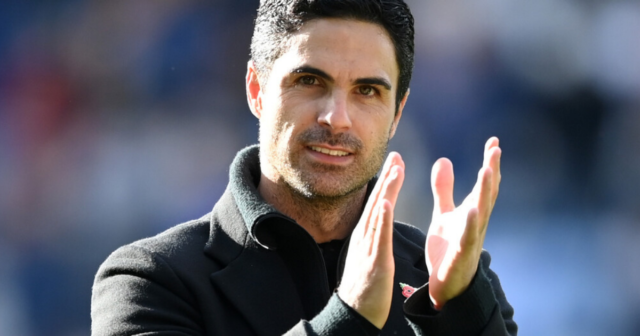 MIKEL ARTETA might be facing a make or break eight days but remains convinced Arsenal can compete in the transfer market with any club in the world.

Yet even if they miss out on Champions League qualification and a Wembley final, Arteta has no fears about being shunned by any of his transfer targets.

The club are currently trying to secure a £50million deal for Fiorentina’s superstar striker Dusan Vlahovic before the transfer window closes at the end of the month.

And Arteta dismissed suggestions the Serbian international does not regard a move to Arsenal as a big enough step up in his career.

He said: “Historically this club has always targeted the best players in the world and they are always interested in coming here.

“And that situation has not changed. Anytime I have spoken to any player, they were so willing to come to Arsenal.

“I haven’t faced any other situation and that’s one of our biggest powers, our capacity to get the attention of people to come and join our club.

“It’s something that is a big advantage for us and we have a strategy of how we want to evolve and improve the team.

“Whenever that is possible we will try to do it but we know that this market is extremely difficult.”

Yet Arteta acknowledges that his cause will be boosted if they can overcome Liverpool and beat Spurs to secure their grip on fourth place in the Premier League.

He admitted: “This is a really important week for us because we are playing in two different competitions that we are engaged with and have a lot of enthusiasm for.

“Against Liverpool we can reach a final and move closer to a trophy and in the other game we are going to play a big London derby against a team that is in the hunt for the same objectives we have.

“We all know the impact these games are going to have on our season but the situation around the squad is extremely volatile and uncertain.

“We have lost so many players in the last week for different reasons and we are trying to adapt to that.

“But we have to make the most of what we have and move on because the next few games ahead of us are far too important.”

Arteta had eight senior players unavailable for Sunday’s shock FA Cup defeat by Nottingham Forest and is still sweating over a couple of Covid tests before naming his team for the Anfield showdown.

But he refuses to use those absentees as an excuse for the lacklustre performance and has delivered a few home truths to his squad ahead of tonight’s trip to Merseyside.

He revealed: “We didn’t perform at a level that was good enough.

“We lacked purpose and cohesion and I didn’t like the quality we had in our attacking phase. There were a lot of things we should have done much better.

“Now I have tried to make it clear so that nobody gets confused about the standards that are required to play at this level against any opponent.”

‘HOPEFULLY GRANIT WILL BE FIT’

Arteta said: “We will put out the best team possible and hopefully Granit will pass the tests and be fit enough to play.

“It’s very difficult when players are in isolation and sometimes we have to stop them when they are at home because they want to carry on and not lose any fitness.

“That’s why the doctor and sports science department are really on top of them so they can understand what they are able to do.

“We don’t want to risk the health of the players so absolutely the first thing we look at is how we can maintain their fitness.

“But there is also a consideration about the mental effects of isolation because it’s very frustrating when you are away in your house for seven or ten days.” 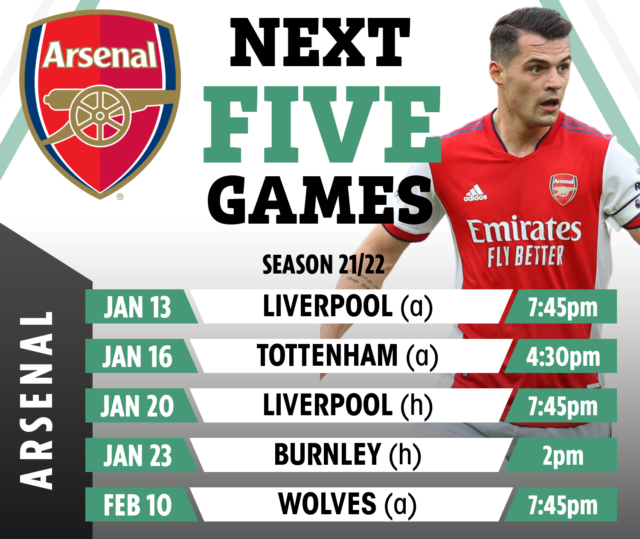 With Partey and Elneny still away at the Africa Cup of Nations, Arteta is dangerously low on central midfield options right now.

Yet he has no regrets about the timing of Ainsley Maitland-Niles’s loan move to Roma last week.

He added: “After what happened in the summer we felt it was the right thing to do and there are certain things you cannot miss out if you want to complete a deal.

“You have to take into account if the player has the right mindset to compete knowing that he is going to be leaving the next day.

“I don’t think it’s logical to make a decision that is going to have an impact for the next six to 18 months just for a day or two.”