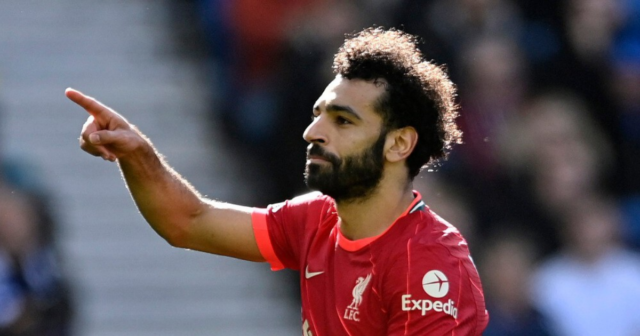 MO SALAH will choose between being a Liverpool legend or chasing the money, reckons Rio Ferdinand.

The Liverpool superstar’s future remains up in the air with his contract expiring in 2023.

Mo Salah is in limbo regarding his contract situation at Liverpool

Rio Ferdinand says he must choose between fans and finances

He wants a mega new pay packet – but his demands far exceed the salary structure in place at Anfield.

And that leaves the Egyptian hero in limbo as contract negotiations stall.

Former Manchester United defender Ferdinand told BT Sport before Salah scored in the Reds’ 2-0 win at Brighton: “Liverpool seem strong and have a clear understanding of where there are.

“Mo Salah is going to say, ‘I’m here, this is what I expect, this is the going rate around the league and Europe as one of the best players and highly coveted.’

“Liverpool will say, ‘This is the pay structure, are you going to live within that or not?’

“Does he want to be an absolute idol, an icon at Liverpool forever and stay by falling in line with the pay structure, or is it about money?

“We will find out at the end of this.”

Kop boss Jurgen Klopp suggested the club have done all they can to keep hold of the forward and the ball is now in Salah’s court.

He said: “It is Mo’s decision, pretty much.

“I think the club did what the club can do. There’s nothing more to say about it from my point of view, it is exactly like it should be at the moment.

“Nothing happened further, so no signing, no rejection or whatever so we just have to wait for that, it’s completely fine, there’s no rush in this situation.”

But Klopp’s comments seemed to have riled Salah’s agent Ramy Abbas who tweeted out a series of crying emojis shortly after.

Ferdinand’s BT colleague and ex-Reds midfielder Steve McManaman also believes his former side should be hesitant to bow to player or agent demands.

He said: “Every Liverpool fan wants Salah to stay. We understand the ‘give him whatever he wants’.

“But there has to be a point where Liverpool say, ‘We can pay this amount, that’s the maximum.’”

And Peter Crouch added: “The problem is if you give him what he wants, Virgil van Dijk’s almost as important, Alisson, where does it end?

“He has to fall in line. Make him the highest paid but not way beyond the structure.

“From Salah’s point of view, he can go in there and say, ‘I should be the highest-paid player in the world.’”

Crouch then had the studio guests in hysterics at the Amex.

The former England striker said: “Liverpool as a football club will always be bigger than any individual.

“They have sold players when it was unthinkable they would do that and they’ve always recovered: Luis Suarez, Fernando Torres, Peter Crouch!”