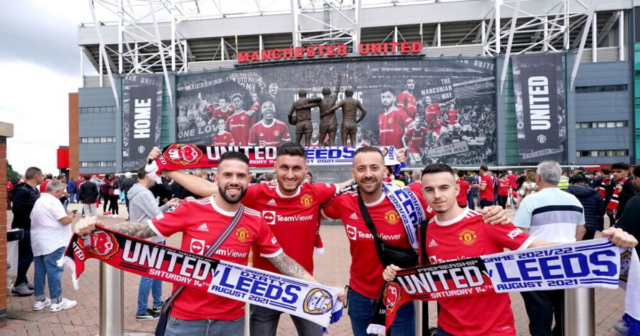 MORE Manchester United fans live in London than in the club’s home city, a survey has revealed.

Just over half of Premier  League fans (55 per cent) actually support their local team, the poll suggests.

More Manchester United fans live in London than in the club’s home city, a survey has revealed

On average, they live 83 miles from the side they follow. More than one in five admit never even going to their side’s ground.

Confirming a commonly held belief among rival supporters, the poll found almost 18 per cent of Man United fans live in London, with just 14 per cent in Manchester.

Similarly, 14 per cent of Liverpool fans live in the capital, compared to 13 per cent on Merseyside. Kop fans are also furthest from the club on average — 129 miles from Anfield — while Aston Villa fans are nearest at 52 miles.

On average, fans will see their team play in the flesh six times a season. However, they will watch them 12 times on TV, according to the Virgin Media poll of 1,500 supporters.

Everton fans will go to the most games this season (nine) and Tottenham fans the least (two). One in five admitted they chose their club based on success rather than geography.

Some  44 per cent of fans who do not support their nearest side get mocked by rivals for being glory-hunters.

More than one in ten (11 per cent) considered switching to Manchester City because of Jack Grealish’s arrival this summer.