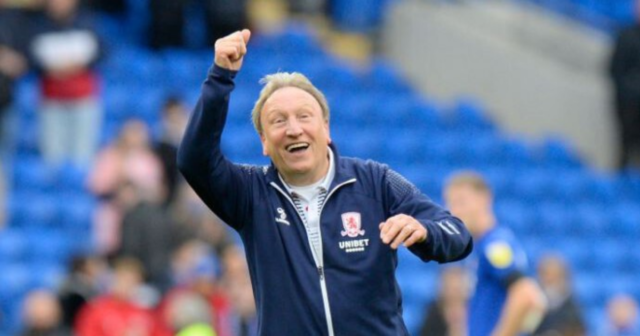 NEIL WARNOCK will write his name into the history books over the next four days.

When his Middlesbrough team host Birmingham on Saturday, he will equal former Crewe boss Dario Gradi’s record of 1,601 games as an English league manager. Then on Tuesday, at Luton, he will surpass it.

Neil Warnock has guided Middlesbrough into the promotion race as he prepares to set a record for an English league boss of 1,602 games over the next week
Neil Warnock locked horns with legendary bosses like Arsene Wenger in the Premier League

To mark this extraordinary record, he sat down to chat with SunSport’s JUSTIN ALLEN about his career.

WHEN DID YOU BEGIN COACHING?

While playing at Hartlepool, I lived in Seaton Carew next to the village green and some kids used to put their cardigans down for a kickabout.

One of them knocked on my door and said: “Mr Warnock, would you mind coaching us?” So I got them on the green at 5pm the next day and put them through a proper session. I loved it.

We entered a league and, when we scored from a corner in an early game, which we’d practised, I ran up and down like Kes from the film, that bloke with the whistle around his neck, high-fiving the lads. This whetted my appetite for coaching.

I managed a Sunday League team called Todwick, a village near Sheffield. We had one floodlight and we trained one night a week.

I’d take all the washing to the dry cleaners after games. We entered a national Sunday League competition and travelled overnight to Stoke. I loved it.

TELL ME ABOUT YOUR FIRST SENIOR JOBS AT GAINSBOROUGH  AND BURTON?

I was winding down as a player and an old Barnsley team-mate of mine Les Harris, who played for Goole, told me his team were looking for a manager so I went to a game.

Their opponents Gainsborough were looking for a manager too. I asked their chairman if he fancied a player-manager and he did! I had six months there.

However I decided to go to Burton because I had played for them and knew their chairman Ben Robinson, who is still there. He is the one chairman you want as a young manager because he’d trust you and was so helpful.

They paid £1,000 in compensation for me. I had five great years in non-league with Burton and the highlight was reaching the third round of the FA Cup by hosting Leicester in 1985.

Yes. My keeper Paul Evans got hit by a piece of wood thrown from the stands with the score 1-1 at Derby’s Baseball Ground. He was worse for wear and we ended up losing 6-1 with Gary Lineker hitting a hat-trick.

No-one wanted to fight our corner apart from SE newspaper, who were brilliant. Chief sports writer John Sadler took it upon himself to say what a disgrace it was and how we should get a replay.

He banged on about it for days and we got the replay! We lost it 1-0 behind closed doors at Coventry. 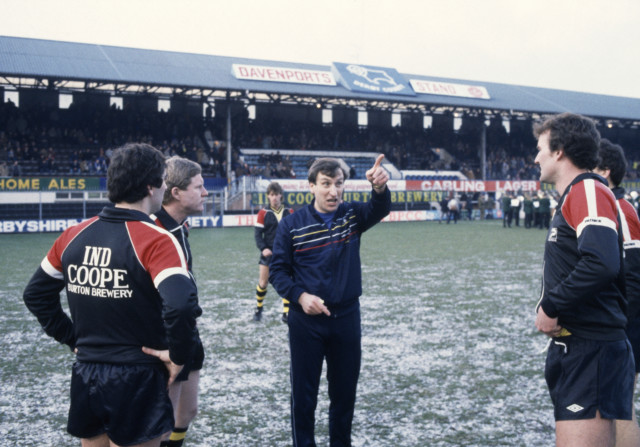 HOW WOULD YOU DESCRIBE  YOUR TEAMS?

Every team I’ve won promotion with has been full of good characters willing to put their bodies on the line.

Craig Short was a bank clerk on £20-a-week when I signed him at Scarborough. I ended up taking him to Notts County and he was one of the best centre-halves I ever had. I have often struggled up front and it’s because moves for strikers I’ve tried to sign have never really come off.

I’ve always had good goalkeepers though.

Plymouth versus Colchester, a second leg play-off semi-final in what is now called League Two  back in 1996.

We lost the first leg at Colchester 1-0 but were 2-0 up in the second half when Mark Kinsella chopped down one of our lads who was through on goal.

The ref failed to send him off and he went on to score to make it 2-2 on aggregate.

I got sent off but Paul Williams scored our late winner and we went  on to beat Darlington in the final.

WHAT WAS YOUR  LOWEST MOMENT?

At Sheffield United, when we lost 2-1 against Wigan at Bramall Lane in 2007 on the last day of the season to be relegated from the Premier League.

The West Ham-Carlos Tevez saga was such an injustice. I’m certain had Sheffield United illegally fielded a player, we’d have been docked points. It still sticks in the throat.

Graham walked off at half-time, smiling and joking with the Arsenal players! 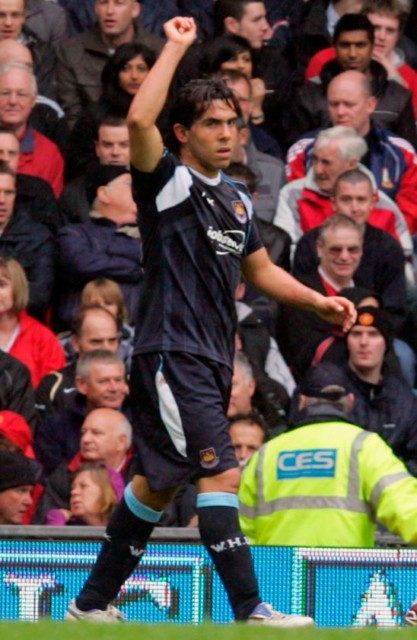 OUT OF THE EIGHT  PROMOTIONS YOU WON, WHAT’S YOUR FAVOURITE?

They were all special but if I was to  single one out it would be my first one with Scarborough from the Conference into the Football League in 1987.

We were 50-1 outsiders and were one of the favourites to be relegated.

Taking Notts County from the third tier to the top  division was huge too, as was promotion with my home-city club Sheffield United into the Premier League.

But the ones with Plymouth, Cardiff, Huddersfield and  QPR are all memories I cherish.

YOU HAVE A 100 PER CENT PLAY-OFF FINAL RECORD . . . TWO WITH NOTTS COUNTY AND ONE EACH WITH  HUDDERSFIELD AND PLYMOUTH?

There’s no better way to get  promoted. I loved the bus trips home afterwards, seeing all your fans  celebrating packed into cars, coaches and trains with scarves everywhere.

I’ve never had much money to spend in the Premier League, which has been a shame.

But, yes, I didn’t have good spells with Oldham or Bury. I put that down to being the fate of a Yorkshireman managing in Lancashire.

However, it’s great to see Bury are on the way back with the imminent takeover of the club and Gigg Lane. We shouldn’t be losing these clubs. 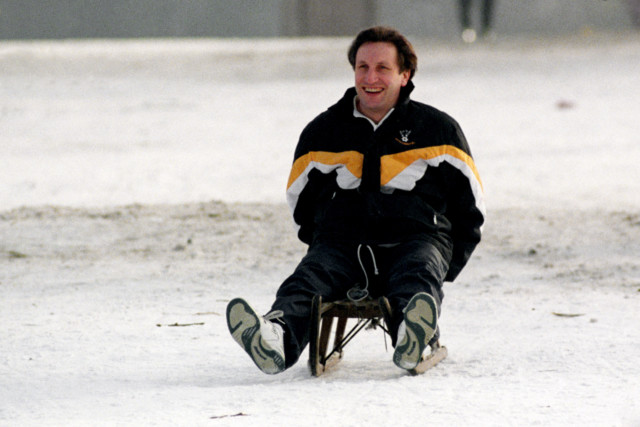 Neil Warnock, who bossed Notts County from 1989-93, has occasionally seen his career slide down but he’s usually been a success in 41 years as a manager

Barnet’s Barry Fry while I was at Scarborough in the Conference. We were near the bottom of the league when he sold me keeper Kevin Blackwell, now my assistant, but we went on an unbelievable run.

Barry came to several of our games when they weren’t playing and we kept winning. We used to applaud him while he was in the stands!

MANAGER YOU RESPECTED  THE MOST?

Arsene Wenger. He was a gentleman — always inviting me and my family into his office afterwards for a drink. No-one has done more for the English game than Arsene with all the nutrition and ideas he introduced.

TELL ME ABOUT YOUR UNSUNG HEROES — YOUR ASSISTANTS?

Paul Evans, Mick Jones, Kevin  Blackwell and Ronnie Jepson have all been great.
Paul lived two doors down from me when I managed Sunday League  football and was with me at  Scarborough and Notts County.

Mick was my assistant for many years, always spoke common-sense and was a calming influence. He’s such a great pal of mine.

Now I have Kevin and Ronnie. Blacky is so reliable, will do anything for me at a drop of a hat and is pragmatic, while Ronnie is abrasive.

None of them are ‘yes men’ — they will give their opinions when I make decisions and I’ll change my mind if I think they’re right.

Cardiff’s Mehmet Dalman. He could not have been more helpful during my time there, a real  pleasure to work with.

YOU WON THE TITLE WITH QPR  IN THE CHAMPIONSHIP. WHAT DID THAT MEAN TO YOU? 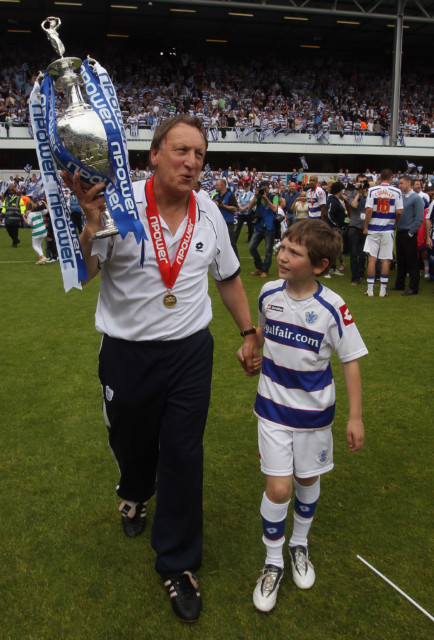 It was a team of misfits. We had managed to keep the club up when we went in.
I bought in a couple of my old Crystal Palace lads, Shaun Derry and Clint Hill.

Heidar Helguson came back from his loan at Watford and was brilliant and we built a team around Adel Taarabt, who was nut-megging people in his own box when I arrived.

He had so much ability and I taught my squad to just let him get on with it. I told them he’ll get us promoted if we deal with him.

It was a shame when we got into the Premier League that Bernie Ecclestone and Flavio Briatore did not want to spend a penny because they were selling the club to Tony Fernandez.

SACKING THAT STUCK  IN THE THROAT?

Notts County was a tough one. We had taken the club to the top division from the third tier.

I turned down Chelsea before  they appointed Ian Porterfield and also Sunderland.

But chairman Derek Pavis sacked me six months later after we were relegated. I told him “be careful because the grass isn’t always greener and it’ll be interesting to see where Notts County end up”. They’re now in non-league!

WILL BORO END UP BEING YOUR NINTH PROMOTION?

Three weeks ago I was the second favourite to be the next manager sacked! Now, after three straight wins, we are sixth and people are talking about promotion.

We’ve had a lot of injuries but should have picked up eight or nine more points.

If we can finish in the top six, with my play-off record, let’s say I’m  quietly confident.