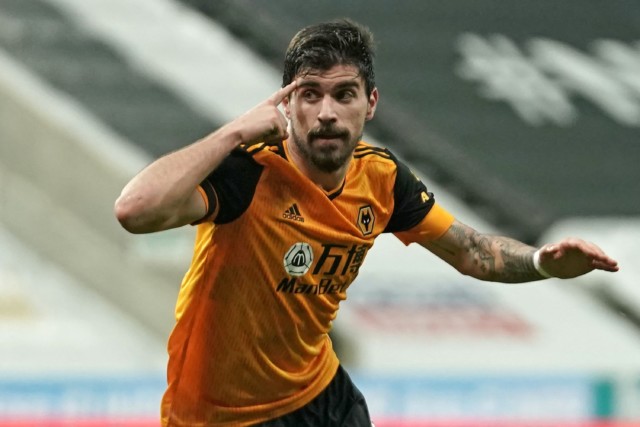 AT the very least, a point keeps the wolves from Steve Bruce’s door a little longer yet.

The beleaguered Newcastle boss can tuck into his Sunday roast safe in the knowledge they will not drop into the bottom three today.

Defeat here followed by a Fulham win at Crystal Palace this afternoon would likely have seen owner Mike Ashley awake from his slumber and act.

Ashley looks set to only roll the dice and wield the axe when the threat of relegation slaps him straight in the chops.

So for now, Newcastle and Bruce survive to fight another day.

Wolves were underwhelming and Jamaal Lascelles’ 52nd-minute header looked to have given the Toon some much-needed breathing space.

But Ruben Neves’ header pegged them back to leave them still nervously looking over their shoulder.

Bruce’s side were the better side for the most part and three points would have been fully deserved.

They had plenty of chances to win it, with Joelinton denied a winner late on by Romain Saiss’ goal-line clearance.

The big team news for the hosts was the return of Martin Dubravka in goal at the expense of Karl Darlow. 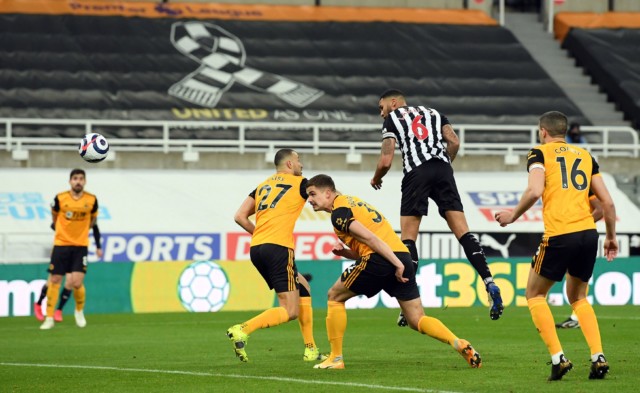 Newcastle went ahead in the 52nd minute at St James’ Park 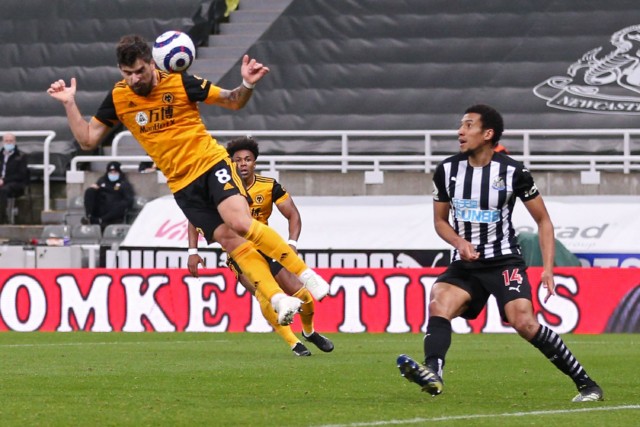 Darlow has saved Newcastle time and again this season while the Slovakian was out injured.

And questions will rightly be asked of Dubravka for Wolves’ equaliser.

He got a strong hand on Neves’ header, but could only watch on in despair as it trickled past him into the net.

But he redeemed himself in injury time, somehow keeping out Fabio Silva’s point-blank header.

While Dubravka was busy late on, Rui Patricio was far the busier keeper in the first half.

Joe Willock’s cross found Isaac Hayden unmarked eight yards out, but the midfielder’s header was tame and straight at Patricio.

Miguel Almiron was next and beat the Portuguese stopper after being played in behind by Jonjo Shelvey.

The Paraguayan looked a mile offside but was played on by Nelson Semedo on the opposite side, but his effort from a tight angle bounced back off the post. 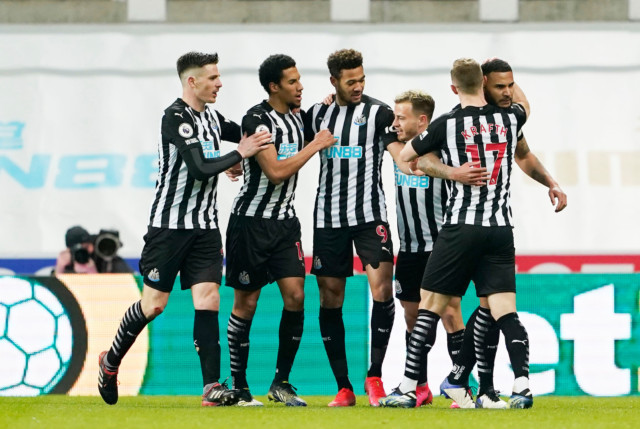 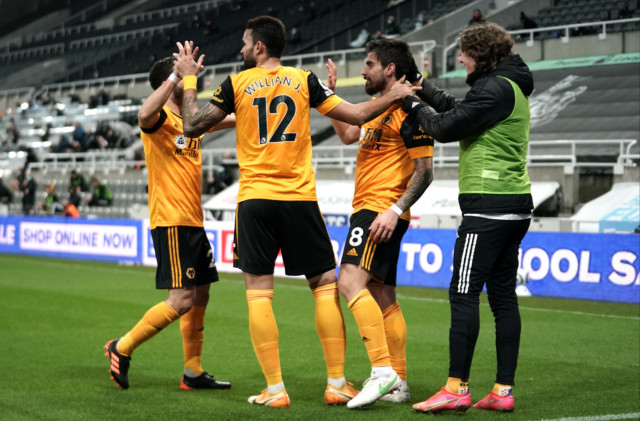 Emil Krafth then fizzed one straight at Patricio from 25 yards, before Joelinton stung his palms from the edge of the box.

The Magpies were all over Wolves and finally beat Patricio after 25 minutes via Allan Saint-Maximin – only for it to be flagged for offside.

A great move down the left saw Saint-Maximin dance into the box and lay it off to Willock.

The Arsenal loanee had to score from 10 yards but Patrico got down well to his right and palmed it into the path of Saint-Maximin, who bundled home from an offside position.

It was chance after chance for Newcastle, but Wolves were only going to get better after a wretched start.

And they finally sprung into life in the 35th minute when speedster Adama Traore found a yard and left Emil Krafth for dead.

Turning on the afterburners down the left wing, he found Pedro Neto free at the top of the box, who flashed first-time just past Dubravka’s near post.

With Nuno Espirito Santo’s side finishing the opening 45 minutes the stronger, Bruce would have been glad for the half-time whistle. 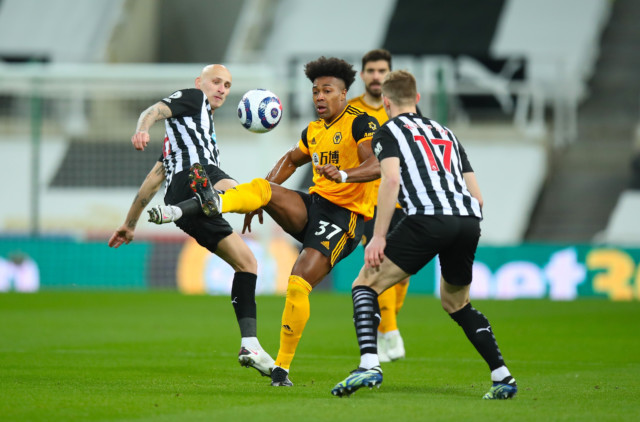 Both sides provided some lively entertainment despite the scoreline 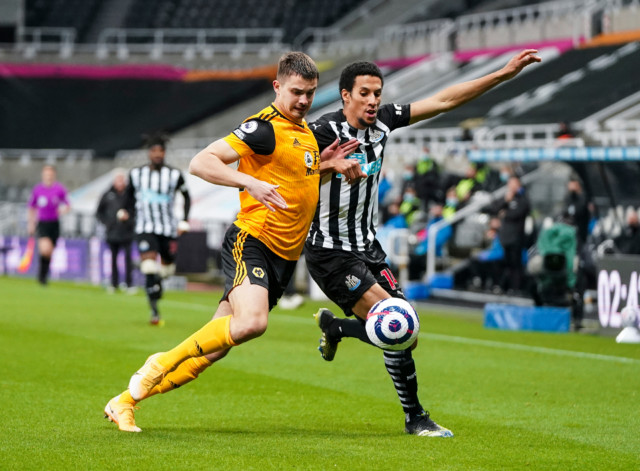 Earlier this month they were made to pay at home to Crystal Palace for squandering a host of early chances.

The impressive but crocked Miguel Almiron was replaced by Ryan Fraser at the break.

And while it all pointed to Wolves continuing where they left off, the Toon were ahead in the 52nd minute courtesy of Lascelles;

Saint-Maximin started it on the left of the box with his usual box of tricks.

The Frenchman’s deep cross was cleared only as far as Fraser on the right, who took one touch and whipped in a peach of a cross to the near post.

Lascelles got in front of Leander Dendoncker eight yards out and powered an unstoppable header down to Patricio’s left.

A massive goal for Newcastle’s survival hopes, it was the skipper’s first since October 2019, which also came against the Black Countrymen.

Wolves came out fighting but struggled to break down the sturdy home defence, with Lascelles making some vital clearances at the other end . 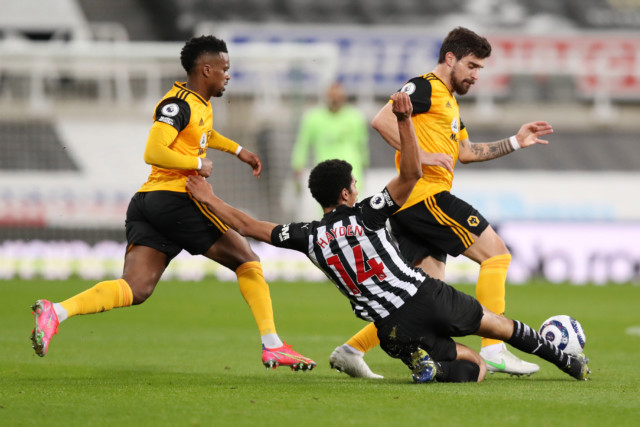 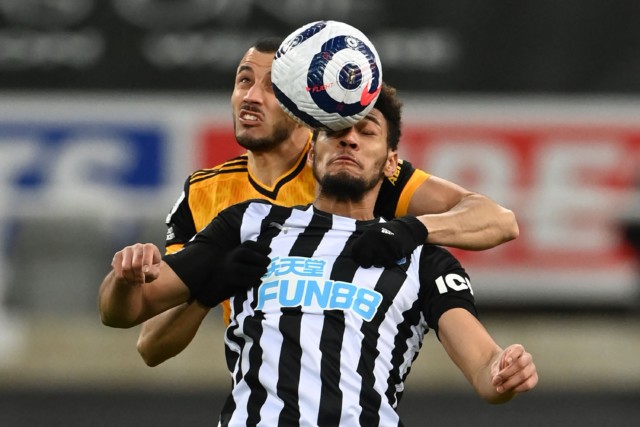 Keeping Traore quiet was always going to be key if they were going to see out the game and, by and large, they did.

But on the other side Neto is a constant danger and popped up to set up Neves for the equaliser in the 73rd minute.

Standing Jamal Lewis up down the right wing, his dinked cross found its way to the back cross, with Isaac Hayden slow to react.

Neves’ low header was decent but Dubravka, outstretched to his right, got a strong hand on it and will have been devastated to see it crawl over the line.

Joelinton then had a great chance to win it after a mazy run from sub Jacob Murphy.

The Brazilian made good contact and beat Patricio, but the covering Romain Saiss blocked it yards off the line.

Turning away, the ball cannoned off his arm, which was tucked into his side, and over.

Despite Newcastle’s protests, a handball would have been harsh.

Wolves sub Silva really should have won it at the death but was denied superbly by Dubravka from no more than a yard out.