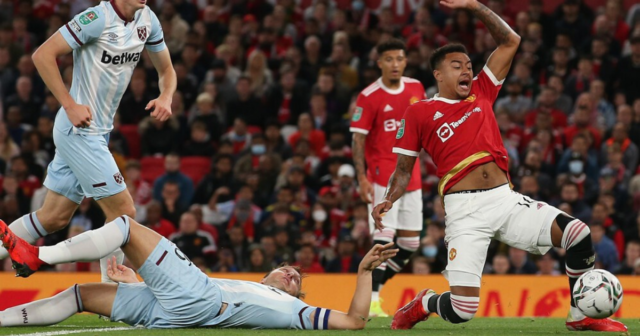 The two players were team-mates at the London Stadium last season and enjoyed a bit of banter as the Hammers won 1-0 at Old Trafford.

Mark Noble enjoyed some banter with Jesse Lingard after this incident

As quoted by the Daily Mail, Noble, 34, said: “That’s football, he dived and I told him off for screaming.

“Funnily enough he didn’t really do it at our place but he does it here!”

But Noble was only joking with his ex-colleague, 28, and the two remain close friends after Lingard’s exploits in the second half of last season.

Noble added: “We had a laugh on the pitch today, I love Jesse. He’s a great character and I’m so pleased he’s come here and getting his chance.

“He’s scored some fantastic goals, obviously the one against us was hurtful, he’s a great lad and he deserves everything he gets.”

The Hammers should have got a point as Noble missed an added-time penalty thanks to a brilliant stop from goalkeeper David de Gea.

But David Moyes’ side quickly avenged that defeat with a famous victory at Old Trafford and kept their hopes of winning an elusive trophy alive.

West Ham haven’t lifted a major honour since their FA Cup triumph in 1980.

Noble told the club’s website: “Sunday night, sitting at home, I felt sick as a pig.

“But you wake up in the morning and you go into training and think: ‘Right I’ve got to play on Wednesday and get ready for it.’

“You’re going to get knocked as a football player, I’m old enough to realise that.

“And at the end of the day you’ve got to be brave enough to step up and take responsibility.

“I missed [the penalty] but tonight, I’ve come out at Old Trafford – one of the best places to play in the world – and I’ve enjoyed it.”