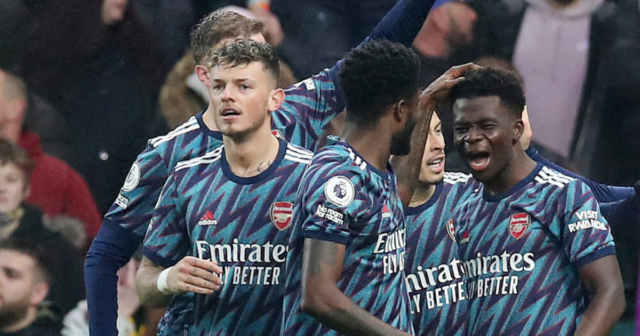 MIKEL ARTETA and his Arsenal team spent last Christmas placed 15th and heading for a season of mediocrity.

Fast forward a year and the team are not only in fourth place – which is one hell of an improvement – but they look increasingly like having a decent stab at finishing in a Champions League spot.

Arsenal strolled to an easy 4-0 win over admittedly weak Norwich at Carrow Road.

Bukayo Saka scored twice along with a rare strike from Kieran Tierney, a penalty from Alexandre Lacazette and an injury-time tap-in from Emile Smith Rowe.

The Gunners left the pitch just before 5pm on Boxing Day and will be back at the Emirates at lunchtime on December 28 to face Wolves.

That is a gap of 43-and-a-half hours so you can see why Arteta and his fellow managers are a bit cheesed off over the schedule.

But the fact the Spaniard’s side are on a run of four successive Premier League wins will maybe help ease the pain of any aches and niggles while wiping out any mental fatigue.

Arsenal returned to the top six a few weeks ago without being particularly impressive and they have certainly been inconsistent this term. 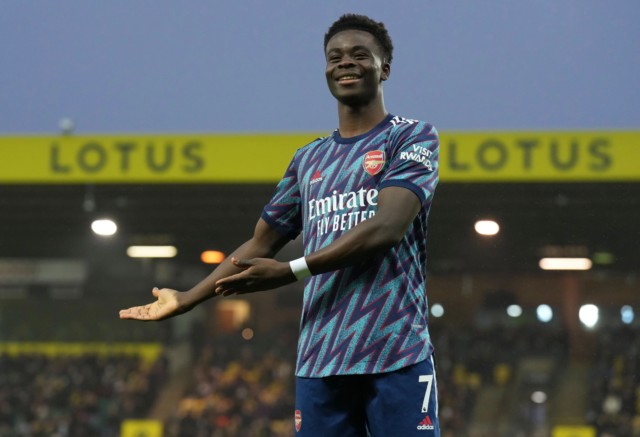 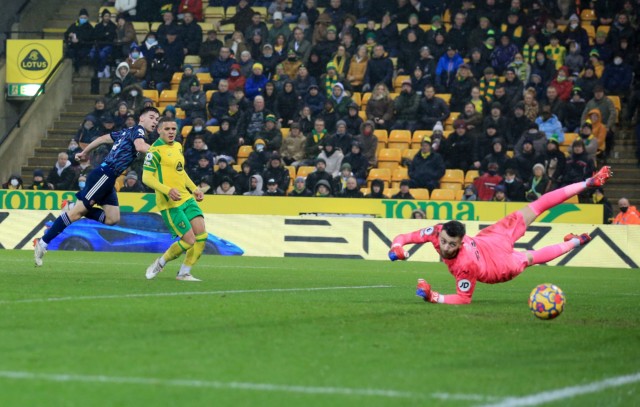 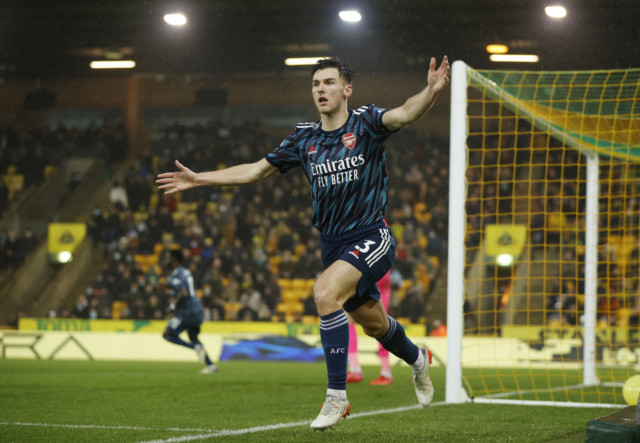 It was only the Scot’s fourth Arsenal goal

But during this encouraging run, and inspired by Saka, Martin Odegaard and Thomas Partey, Arsenal have developed a bit of swagger, even though there is clearly some work to do.

For Arteta, this winning streak is even sweeter as he banished club captain Pierre-Emerick Aubamayeng for his poor discipline.

Arsenal were last in the top four on Christmas Day 2016 and they have not featured in the Champions League since that year.

While Manchester City, Liverpool and Chelsea are clearly the best three teams in the Premier League, that final spot is certainly up for grabs.

At least they are making light work of teams like Norwich, a side they struggled to beat 1-0 at the Emirates in September.

As for the Canaries, they are destined to leave the Premier League in May.

Despite some early encouragement after new boss Dean Smith took over and the fact they have been decimated by injuries and Covid, the team is still nowhere near good enough.

This defeat was largely down to a string of embarrassing errors.

Unusually, Norwich keeper Tim Krul handed Arsenal some early team news on Christmas Day by announcing he had been struck by Covid.

This meant Angus Gunn, 25, featured in a Premier League game for the first time since Southampton’s 9-0 defeat at Leicester in October 2019. 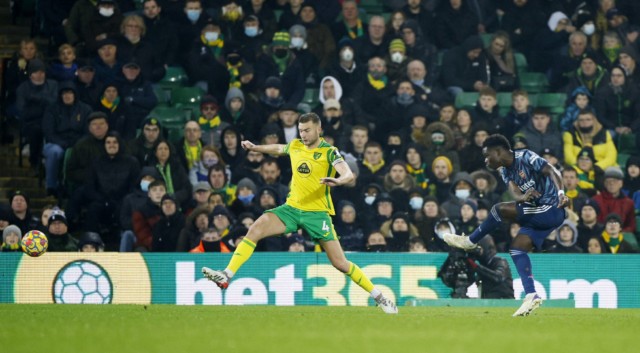 Saka fizzed in this effort to make it 3-0 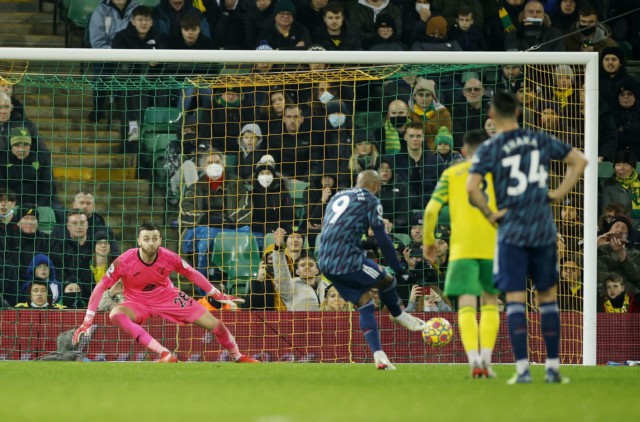 Lacazette made no mistake from the spot in the 85th minute 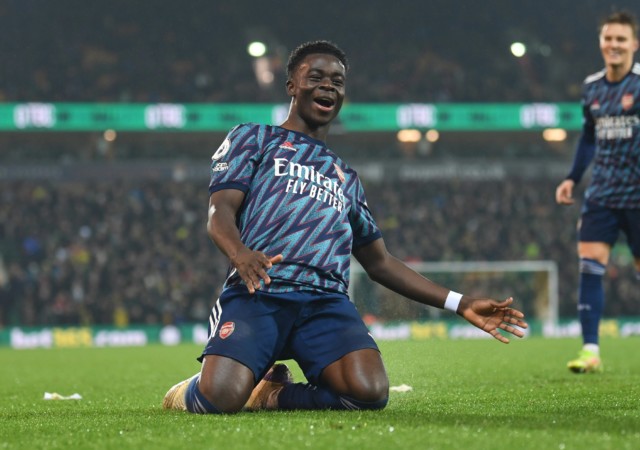 A childhood Norwich fan as his dad, Bryan also played in goal, he returned to the club in a £5million move from Saints in the summer.

Gunn was picking the ball out of the net after just six minutes and he could have done better to keep out Saka’s shot.

Left-back Brandon Wiliams was also to blame for failing to close down Saka who threaded a shot through his legs. Odegaard delivered the assist after Ozan Kabak initially lost possession.

Norwich’s players, guilty of some terrible decision making, took over 30 minutes to give Aaron Ramsdale something to think about but Przemyslaw Placheta caused plenty of panic with a super-quick run and then shot straight at the England keeper. It is no surprise Norwich have only scored eight times this season.

Initially, they threatened to put up a bit of a fight as the game livened up.

Granit Xhaka was yellow carded following a confrontation with Max Aarons and Placheta was cautioned for angrily confronting Ben White, who had few problems switching across to right back.

Placheta was then guilty of losing the ball ahead of the second goal which killed the game off. Odegaard delivered yet another brilliant pass to Tierney and while his first touch was heavy, the Scotsman’s second was a shot via the far post with Gunn having little chance. It was his fourth goal for his club,

Gabriel Martinelli thought he had made it 3-0 after his shot looped off Aarons and into the net although he was fractionally offside.

Yet the third soon arrived with Saka making absolutely mincemeat out of Williams, who was turned inside out on the edge of the box – and then again. The England international brought his tally to six goals for the season by rifling a low shot past Gunn.

Kabak got penalised for a clumsy challenge on Lacazette who sent Gunn the wrong way from the penalty spot.

And Emile Smith Rowe completed the hammering in injury-time with an easy goal after Nicolas Pepe’s deflected pass fell perfectly.

Norwich have not won a top-flight game on Boxing Day since 1987 and it is fair to say they will not get the chance to change that terrible stat as they will be back in the Championship. 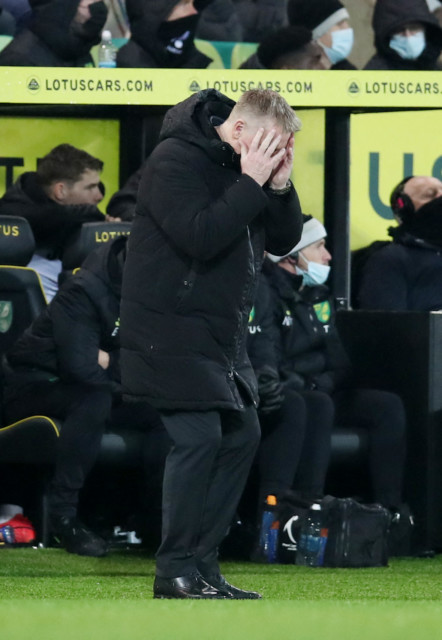 It was a grim Boxing Day for Norwich boss Dean Smith 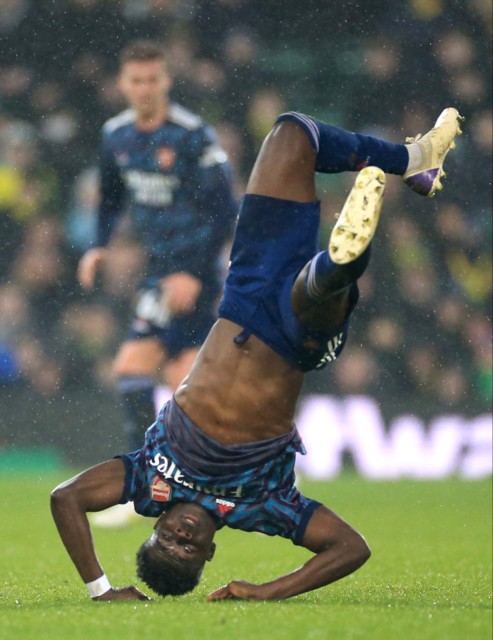 Saka helped himself to a couple of Christmas presents 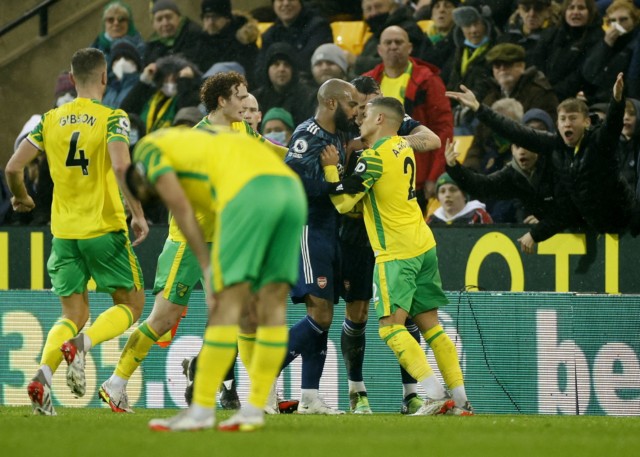 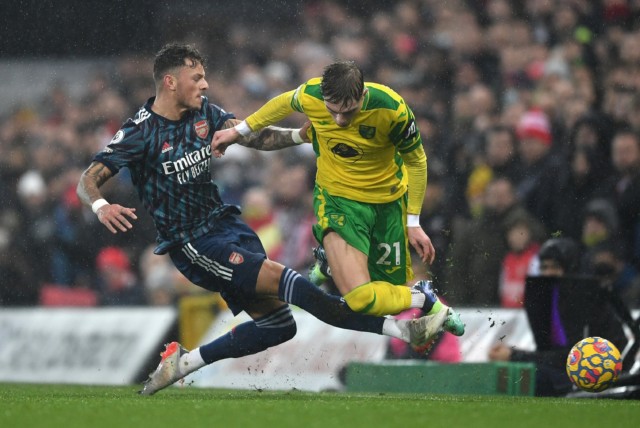 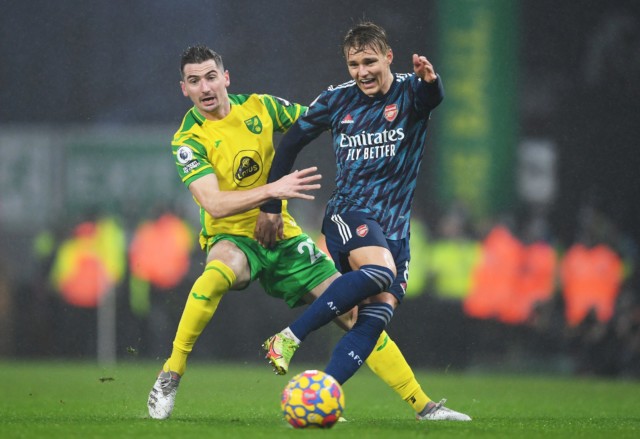 It was a fiercely contested battle in East Anglia 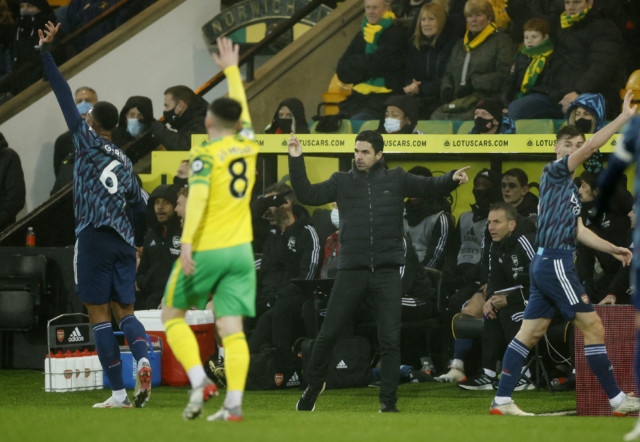 Mikel Arteta was as animated as ever on the sidelines
Advertisement. Scroll to continue reading.
In this article:arsenal, carrow road, chelsea, Leicester, liverpool, manchester city, premier league