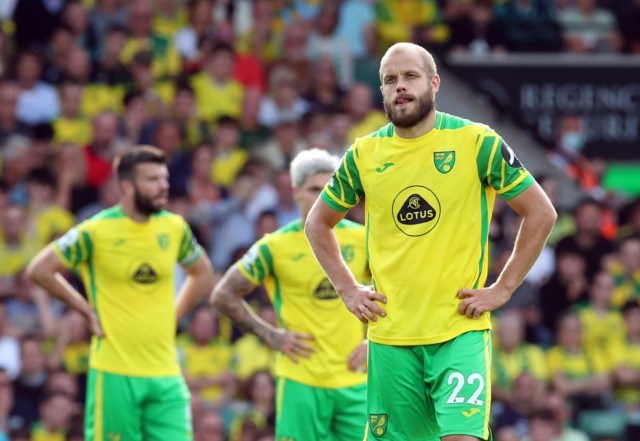 NORWICH face a welcome distraction from what has so far been a wretched Premier League campaign.

But unfortunately for the winless Canaries, the opposition could hardly be more daunting.

Liverpool head to Carrow Road for a Carabao Cup tie just a month after annihilating Daniel Farke’s men 3-0 on the opening day.

The hosts have yet to get a single Premier League point in their opening five games and were easily beaten 3-1 at home by Watford at the weekend.

But they were 6-0 winners over Championship leaders Bournemouth in the previous round of this competition.

What time does Norwich vs Liverpool kick off?

What TV channel is Norwich vs Liverpool on and can I live stream it?

Jakob Sorensen could return from a dead leg for Norwich in time for this game.

Bali Mumba could make an appearance after recovering for a dislocated knee while Ben Gibson and Dimitrios Giannoulis will hope for starts.

Todd Cantwell is out for the Canaries for personal reasons.

Roberto Firmino and Harvey Elliott are both out for Liverpool while Thiago Alcantara is almost certain not to feature after pulling up with a calf strain against Crystal Palace at the weekend.

The likes of Nat Phillips, Divock Origi, Takumi Minamino and Curtis Jones are all set to start in a much changed Liverpool side.

*Odds from Betfair correct as of Saturday, September 18.

Did you miss our previous article…
https://www.sportingexcitement.com/football/premier-league/james-rodriguez-flies-out-to-qatar-for-talks-over-everton-transfer-exit-as-he-looks-to-end-goodison-park-hell