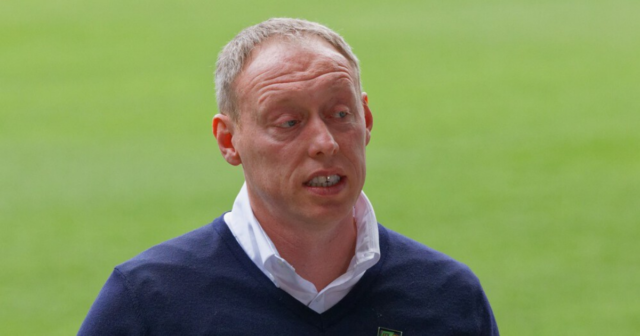 NOTTINGHAM FOREST are set to barter with Swansea City over a compensation fee for Steve Cooper as they look to appoint Chris Hughton’s replacement.

Forest parted company with the former Newcastle United and Brighton boss on Thursday morning after Wednesday night’s 2-0 defeat by Middlesbrough left them rock bottom of the Championship.

Nottingham Forest will have to pay Swansea compensation if they want to hire Steve CooperForest want Cooper to replace Chris Hughton, who was sacked on Wednesday

The result maintained Forest’s worst start to a season for more than a century after Hughton managed just one point from his first seven league fixtures.

And they believe the 41-year-old can restore their flagging fortunes.

However they will have to pay compensation for the coach who led Swansea to back-to-back play-offs and made his name leading England’s Under-17 kids to world youth cup glory.

Cooper still had one year left to run on his three year Swansea contract when he left the Swans by mutual agreement after two seasons in charge in July.

Part of that severance agreement was that the Welsh club would still be entitled to a compensation fee if Cooper joined another club within the remaining 12 months of his deal.

Although Cooper had a £3million release clause in his original contract that was reduced by half when he struck his departure deal.

Forest will try to reduce that further and believe £1million would be a fair figure for Cooper who was immediately installed as the odds-on favourite to replace Hughton, ahead of John Terry and Chris Wilder.

In his 345 days at the City Ground, Hughton never managed to take Forest higher than 14th in the Championship.

And the club now wants a more progressive coach, who will embrace a new data-based analytical approach.

Cooper is seen as a safe pair of hands who will steer Forest away from the relegation zone and bring out the best in the club’s promising young Academy reared players.