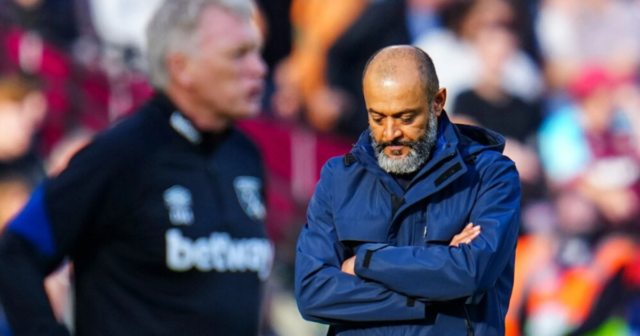 NUNO ESPIRITO SANTO’S attempt to be too clever has come back and bitten him on the backside.

The Tottenham boss, 47, unexpectedly announced last week he would be leaving his best 11 players at home to prepare for the Premier League clash at West Ham.

Nuno took the rest of his senior stars and top kids to Vitesse Arnhem in the Europa Conference League last Thursday.

His thinking was clearly prioritising the top flight while believing his second stringers would have enough to get the job done in Holland.

But he came massively unstuck as he lost both matches 1-0 – leaving his reputation and squad morale in tatters.

‘One game at a time’ is the old footballing adage, and it is said for a reason.

The beautiful game is so popular is because it is wonderfully unpredictable.

You can nor should look too far into the future… neither can you successfully predict or presume the outcome of fixtures.

If you could, those of us who spend ages every Saturday morning filling in their weekend Accas in the bookies or on their phones would be sunning it up in the Bahamas.

Nuno’s policy of thinking too far ahead has also left most of the senior members of his Europa Conference League squad seriously angered – creating a needless chasm in his squad.

Those outcasts went into the clash in Arnhem knowing no matter how well they played they had no chance of being in their manager’s starting XI against the Hammers.

What kind of message does that send out? A negative one, that’s what.

Harry Winks, one of Tottenham’s longest-serving players, summed it up perfectly after the Arnhem defeat by saying: “It’s meant to be competitive.

“Everybody should be fighting for weekend games and it’s difficult.

“Motivation should be everybody fighting for the same cause and the same thing.”

Winks paid the price for his criticism of his manager’s strategy as he was not even on the bench on Sunday – which would not have gone down well with the rest of the Spurs squad either.

Punishing players for speaking out is treating them like children. And if you do that you can expect childish performances in return.

Nuno picking a team two games before was a schoolboy error.

The Portuguese boss was on a roll after three wins on the spin in all competitions.

Now after two successive defeats he suddenly finds himself under pressure again. And it is all his own fault.

He has been in the game long enough to know momentum in football is everything.

Had he taken some of his top stars to Arnhem and won, or even drawn, Spurs could have had their qualification for the Conference League’s group stage wrapped up next month.

Now, as it stands, they will have to kick off a busy December period by having to field a semi-strong line-up in their final group game at home to Rennes in a bid to avoid being knocked out of Uefa’s new tinpot Thursday night competition at the first hurdle.

Why not get your place in the next round sorted and then rest players?

As for the Prem, Spurs now host Manchester United on Saturday when the only consolation for Nuno is that he won’t be the most under pressure manager on show.