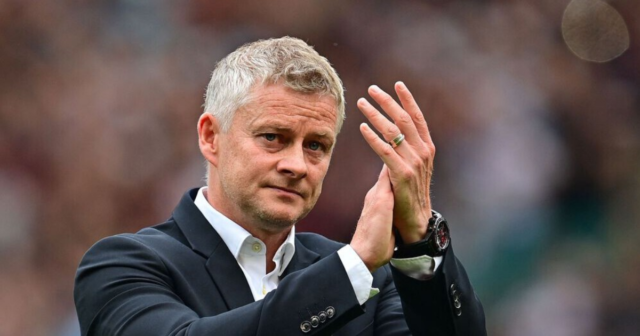 IT DIDN’T take long for Ole Gunnar Solskjaer and Manchester United to become the target of the TV pundits once again.

His old team-mate Gary Neville was at it on Sky once more claiming Solskjaer is under pressure now to deliver silverware this season or next after more backing in the transfer market.

He has also claimed in the wake of United’s 1-0 home defeat to Aston Villa on Saturday that the team under Solskjaer is lacking a clear style of play.

But having been used to Neville’s forthright views as a team-mate, Solskjaer was once again happy to handle the flack ahead of their Champions League game at home to Villarreal.

Solskjaer said: “He always has a lot to say, even when I was sat next to him in the dressing room.

“Yes I’ve been backed, the backing I have got says to me we are sticking to a plan – but we are in a results business. Expectations have improved with our signings.

“The pressure is a privilege. To work in this environment, you have to embrace that pressure.

“We are here to win, don’t think twice about that. Gary knows that.

“We have an obligation to win here in a certain style, sometimes that is risky and you lose one or two, but we’ll get there and hopefully we’ll get there in April or May.”

When it comes to the style of play Solskjaer has definitely made United a more attractive watch compared to the times under Louis van Gaal and Jose Mourinho.

He says that if they are guilty of anything it is in getting the ball forward too quickly.

He said: “The Aston Villa game we broke up play really well, and maybe we attacked too fast, we want to keep the tempo up.

“Maybe we finished the attacks too quickly. Then if you slow it too much it might be against a low block.

“We know Villarreal defend well and high. We need to play quick. Gary knows what the DNA is at the club and what we are trying to do.”

Solskjaer found himself having to defend some individuals in his team as well after three defeats in four games across three different competitions.

Fred and McTominay played as the defensive midfield duo in the defeat against Aston Villa and their combination has brought criticism from some sections of fans.

But Solskjaer is sticking by them.

He said: “The stats for those two have brought many good results with the energy they give us, the way they break up play.

“They are instrumental together with energy and desire and they are two that I can trust. Fans always have opinions when you have good players to pick from and it is hard to leave players out.”

United go into their second Champions League group game already under pressure to get a result after losing their opener away to Young Boys.

Solskjaer said: “If you end up with zero points after two games you need to win the last four probably. It’s not a must-win game but it is very important after the Young Boys game.

“If you win one away and your home games you should be through. We’ll get a good response from the weekend.”