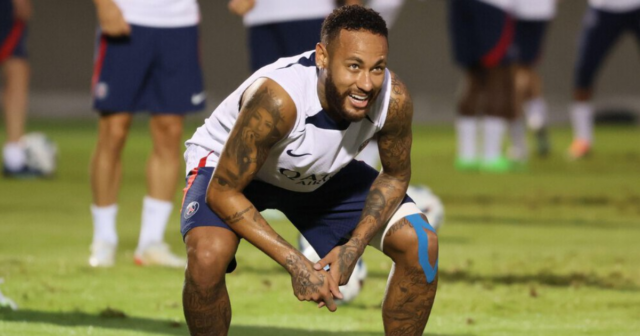 PEP GUARDIOLA says he has no plans to bring Brazilian superstar Neymar to Manchester City this summer.

Reports in France suggested the champions had been offered the chance to buy the Paris Saint Germain ace.

But City are not on the look-out for any more forward reinforcements having landed Erling Haaland and Julian Alvarez already this summer.

Raheem Sterling and Gabriel Jesus have gone – but Guardiola insists they will not be replaced by Neymar.

He said: “I’m sorry for the paper who did the story – but it’s not true. Their information is not right,

“Every summer Manchester City are going to buy 150 players.”

City have brought in a total of four new faces and are now on the look-out for a new left-back to replace Arsenal bound Oleks Zinchenko – with Brighton’s Marc Cucurella the top target.

However that would be the final new arrival at the Etihad this summer – with City sources ruling out any further business.

Guardiola’s hopes of a perfect pre-season have been scuppered by the absence of three stars due to Covid regulations.

John Stones, Phil Foden and Ilkay Gundogan were not able to join City’s pre-season tour due to US entry requirements.

Instead the trio have joined the Under 23 squad in Croatia before reuniting with the first team early next week.

Guardiola was hoping he would have his full squad all together for pre-season for only the second time in his six year reign.

But losing three of his big names in such circumstances have put paid to that.

He said: “Yes it’s disappointing, I would like them to be here.

“In our second season – when we ended up with 100 points – that was the only season when we were all together.

“Since then it’s always been maybe four players arriving and then a week later another one.

“And because of that we started the seasons with incredible problems. Every year we drop points.

“This season I thought maybe we will be all together but due to the personal situation of these players, we will not.

“But it’s what it is, we are going to move forward and we have to adapt.”