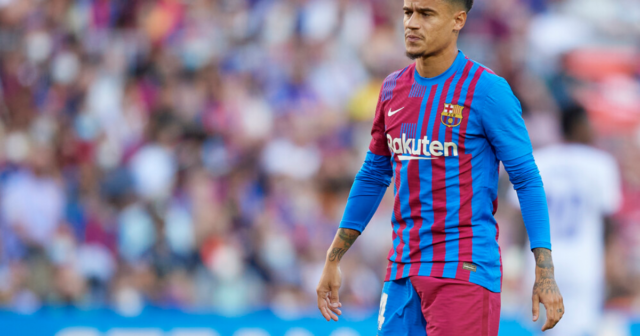 BARCELONA outcast Philippe Coutinho ‘accepts’ that he needs to leave Barcelona in January, according to reports.

The ex-Liverpool man is stewing on the bench at the Nou Camp, with Xavi preferring to select Barcelona’s young prospects over the 29-year-old.

And the playmaker has realised that in order to be selected for Brazil’s squad for next year’s World Cup, he needs to be playing regular football.

Coutinho has been capped 63 times by Brazil, but starting just five LaLiga games this campaign severely hampers his chances of making the 2022 World Cup squad.

Newcastle have been credited with an interest in signing the playmaker, but Mundo Deportivo report that he has no desire to join the Magpies.

Instead it’s claimed that Arsenal, Tottenham and Everton are the three clubs to have lodged proposals to Coutinho’s agents.

Although at this stage there is ‘nothing advanced’ with any club when it comes to negotiations.

Barcelona are desperate to rid themselves of Coutinho’s high wages following the arrival of Ferran Torres for £55million from Manchester City.

And for a club already sailing close to the wind in terms of finances, axing both Coutinho and Samuel Umtiti is a priority.

Club bosses agreed with Coutinho’s representatives earlier this month that a January move is beneficial for all parties.

With the transfer window set to open this weekend, Barcelona have got a month to secure a move for the out-of-favour playmaker.

It’s thought that the player they signed for £145million in 2018 views Arsenal as his preferred destination.

Mikel Arteta is even said to have ‘given the green light’ to signing Coutinho as he looks to bolster his squad amid an intense battle to finish in the top four.

Spanish outlet Sport report that both Coutinho and his representatives reckon Arsenal can match his ambition and wage demands.

After spending £150m in the summer, more than any other Prem team, the Gunners are ready to splash the cash again in a bid to return to the European stage.