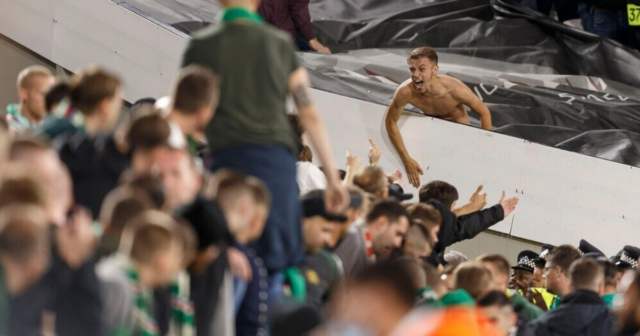 Two of the supporters were nicked for assaulting an emergency worker at the London Stadium, understood to be an officer.

Stewards and police were caught in several physical battles with the Rapid fans as they attempted to storm the West Ham section of the ground.

It was during one of these when the assault is understood to have taken place, while another was arrested for carrying an offensive weapon.

Now the Metropolitan Police will study the hours of video evidence they have from the night, when supporters from both teams hurled missiles – included bottles of urine – at each other.

And that could mean several West Ham fans being identified and potentially facing stadium bans if they are proven to have been part of the trouble.

Uefa are studying the reports of their match delegates before deciding whether to begin formal investigations into what happened.

But it is thought both clubs will be hit with disciplinary action for the behaviour of their supporters.

And the conduct of Vienna’s own supporter liason staff, who clashed with the authorities on the ground, is also an area they are thought to be looking at.

Trouble had been simmering between the two rival fans from even before kick-off.

The visiting support began antagonising West Ham fans prior to a light show which was celebrating the London club’s first home game in the Europa League.

With the ground in virtual darkness, several water bottles were launched between the two sets of supporters separated by a three-metre gap in the corner of the ground.

Once the lights had come back up, the throwing stopped for a period – but after around 20 minutes of action, occasional missiles were being exchanged between rival fans.

Then when Rice opened the scoring on 28 minutes, it sparked wild celebrations and taunting from the Hammers fans – which caused fury among the Vienna group.

The travelling supporters hopped over the advertising hoardings and tried to rush the Hammers fans, with as many as 30-40 attempting to break through.

Advertisement. Scroll to continue reading.
In this article:london stadium