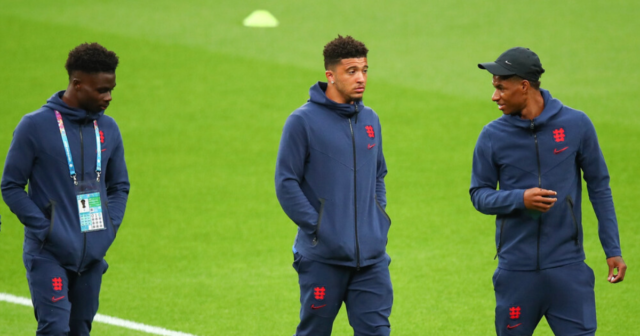 Gareth Southgate’s side lost to Italy at Wembley in the showcase earlier this month in heartbreaking fashion.

Bukayo Saka, Jadon Sancho and Marcus Rashford all cruelly missed for England in the Euro Final shootout defeat to ItalyPrince William, pictured with Kate and his son George at the game, hugged all three players afterwards

Manchester United duo Rashford and Sancho had both failed to convert their spot-kicks before Gianluigi Donnarumma saved Arsenal star Saka’s crucial penalty to secure the trophy.

Now England defender Conor Coady, who did not play a minute at the tournament, has revealed Prince William visited the squad in the dressing-room after the defeat.

And he had a special hug waiting for the trio who missed their penalties.

Speaking to The Athletic the Wolves ace said: “The changing room was quiet after the final.

“We were trying to console the three boys. The manager was brilliant at that. Then Prince William came in.

“I’m big on the royals, fascinated by them and when he walked through the door it was, ‘Wow, unbelievable’.

“He gave Rashy, Sanch and Ayo a hug. It was an incredible, incredible moment.”

Following the devastating defeat, the three players who missed were subjected to vile racist abuse online while a mural of Rashford was vandalised with graffiti before a huge outpouring of support for the trio – including from Prince William himself.

Coady added: “Those three lads are incredible characters and brave, brave people who play without fear.

“We practised penalties every day in training and I didn’t see those boys miss one. Honestly, if they did, I didn’t see it.

“The courage they showed, the bravery to stand up and be counted and do what they did… the stuff that’s gone on afterwards is absolutely despicable. It’s horrendous, that.

“Listen, my kids look at those boys as heroes. They look up to them. They want their names on the back of their shirts.

“As a dad, as a player and as a supporter, that makes me feel very, very proud. That’s what we should all be like.”