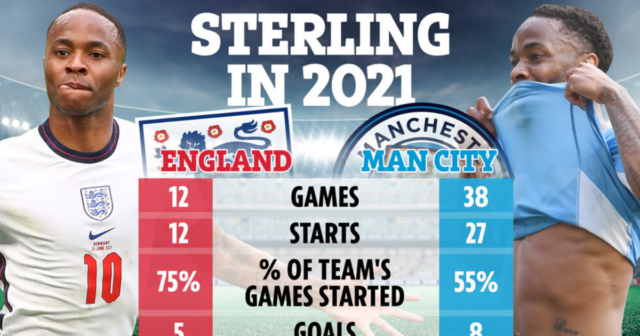 A BALLON D’OR nomination at the weekend only added to the intrigue over the Curious Case of Raheem Sterling.

The toast of the nation during England’s run to the final of the Euros in  the summer, he has found himself marginalised at Manchester City.

And unless that changes soon, his glittering spell at the Etihad will be over by the time his  contract expires in summer 2023.

Tonight, Gareth Southgate is expected to revert to his ‘first team’  at Wembley after giving the fringe men a run-out in Andorra.

Of course, that will include Sterling as the backing of the England  boss has never wavered.

But it will be a different story by the end of the week as the 26-year-old returns north to resume the season at his club.

City boss Pep Guardiola picked what many consider to be his best side for recent crunch  away games at Leicester, Chelsea and Liverpool.

Given the quality of those  performances, nobody would claim he  got his selection wrong.

Yet Sterling was on the bench for all of them, coming on in the second  half on each occasion.

In fact, he has only one league start under his belt since the opening day  — in the goalless draw with Southampton.

Of the four games he has started for his club this season, the team   failed to win three of them.

Such a situation would have been unthinkable at the turn of the year. Even at the end of February when he scored the only goal in a vital victory at  Arsenal.

Yet he seemed to pay a heavy price for City’s poor show in a home defeat  to United in the Manchester derby  in March.

Around that time, he also rejected several invitations to open talks over  a new contract.

Sterling had recently split from his long-term agent, Adie Ward, and needed time to get his  professional business in order.

With more than two years left on his contract at the Etihad, he knew  there was plenty of time to get an extension sorted.

Yet that period coincided with him losing the place in the starting  line-up  he had made his own for almost all his six-year stay.

Talks over his future are now on hold while he sees how the next  few weeks and months play out.

Despite winning eight major trophies already with City, his desire and  ambition to play a  pivotal role in a successful team remain as strong as  ever.

Sitting on the bench is not something he wants to be doing at this stage of his career.

Sterling has scored 115 goals for City. But only two have come since that winner at the Emirates in  February — spread over 26 appearances, many of which have been from the  bench.

His current goal drought at City echoes the one he faced at international level not so long ago.

Sterling failed to find the net at the last World Cup in Russia, meaning  he had gone 26 games without scoring for England.

What’s more, he had managed only two goals in his first 44 appearances for  his country.

Yet Southgate never doubted him  — and his patience was rewarded  as his next 21 appearances brought 15 goals, including that memorable run at the Euros.

Maybe another at Wembley tonight  against Hungary could  help  kick-start his season. 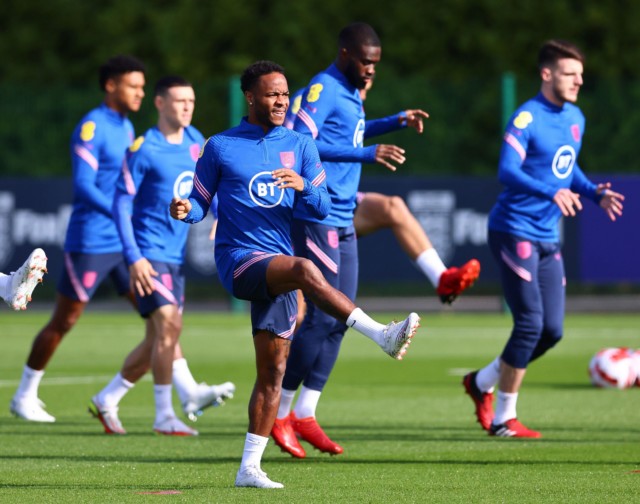 Sterling’s professionalism and mature  attitude have been commended by many at the Etihad. He has kept  his head down and never sulked.

In the summer he saw the champions go out and spend a record £100million  on Three Lions team-mate Jack Grealish.

The former Aston Villa captain’s best position is considered to be as a left-sided forward — the one in which Sterling has excelled for several years. He could not have been blamed for fearing the worst.

Having failed to land a replacement for Sergio Aguero in the summer, Guardiola has spoken of his plans to use the former Liverpool man in a more  central role.

It is not a position that comes naturally to Sterling but  Guardiola was full of praise for his performance down the middle at Paris Saint-Germain.

He said: “Raheem played really good as a striker against PSG. He created  incredible spaces for us.

“Raheem can play good on the right, like he did in the 100-points season. He played incredibly good on the left when we got 98 points.

“And as a striker he always has the movements to create something for  himself in front of  goal.”

Sterling remains desperate to play regularly and is willing to play wherever he is asked by Pep.

Ultimately, though, his future at City is likely to be decided by how much he actually plays.

The interest from Barcelona has been well documented. Arsenal boss Mikel Arteta, his old coach at City, is also a huge fan.

City have made it clear they will not let him go in January.

They remain happy with Sterling and would like him to commit his long-term future to them.

Whether he remains happy with City will depend on whether he can win his place back.