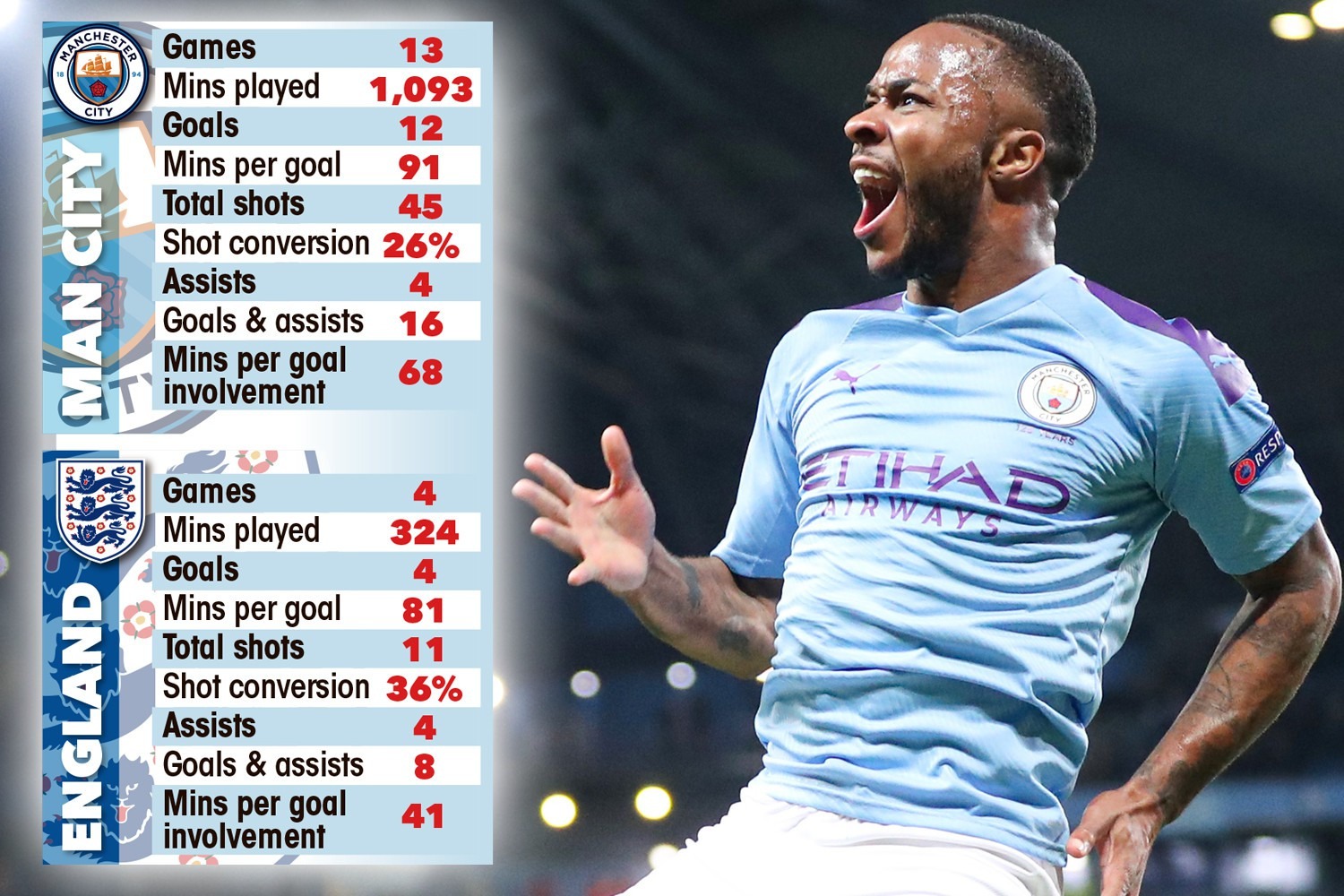 RAHEEM STERLING believes his blistering start to the season shows he is coming of age at Manchester City.

The England ace hit a Champions League hat-trick against Atalanta on Tuesday to make it 16 goals for club and country this term.

It comes on the back of the 31 he scored during the 2018-19 campaign by far his best season in front of goal.

Sterling, 24, reckons he has grown up since he arrived at the Etihad more than four years ago and has also had a long think about what kind of player he wants to be.

The former Liverpool man, who cost City 49million, realised that taking players on but having no end product was not the best use of his talent.

Asked how he has become more clinical in the last 18 months, QPR youth product Sterling said: One is age.

Another is being in a good team. And then it is down to yourself, its what you want to do in football.

I keep learning each day to be better at it and to be involved in the game and be effective.

While City boss Pep Guardiola will look to rotate his squad in the next couple of weeks, Sterling has become almost undroppable.

And within minutes of grabbing the match-ball on Tuesday night, he had already set his sights on Saturdays opponents Aston Villa.

He said: Im thriving and just waiting for the next game really.

Ive scored a hat-trick and Im looking forward to the weekend to hopefully get some chances and be involved again to score some goals.

Guardiola had spoken before the game about City not being clinical enough to become kings of Europe this season.

Yet their 5-1 hammering of Atalanta means they already have ten from three games in the current European campaign.

Sterling admitted he could have had four against the Italians but said: I thought we were clinical. We stayed patient, waited for our chances and then we took them.

England and City team-mate John Stones believes Sterlings hunger for scoring goals and making a difference is shining through.

WHEN Pep Guardiola and his staff started working with Raheem Sterling three years ago, he was scared of the goal.

Now the Manchester City star, 24, is one of the most effective forwards in Europe.

His hat-trick against Atalanta on Tuesday took his tally to 16 this season for club and country and he also played a big part in both of Sergio Agueros goals.

Assistant boss Mikel Arteta said getting rid of Sterlings fear was one of the first things they tried to do when they arrived at the Etihad.

In the book Peps City the Making of a Superteam, which goes on sale today, Arteta also said the 49million price-tag weighed heavily around the former Liverpool mans neck.

He said: The huge transfer fee was pretty detrimental in terms of his self-confidence. As things didnt come off for him you could almost see Raz fading away.

“We wanted him much closer to the penalty area. It was like he was a bit scared of the goal.

We wanted him to become the kind of player who would get us a goal every game, or even just making two or three big chances.

The winger became only the eighth English player to score a hat-trick in the Champions League. His 11-minute second-half treble was the third quickest in the history of the competition.

Defender Stones said: Hes been on fire. Hes got that mentality, he wants more.

He might be disappointed because he could have scored four but I think he should be very proud for scoring a hat-trick in the Champions League.

Im very happy for him and he helped us to make a step closer to the next round.

Stones has endured a frustrating year at City due to injuries and a loss of form but is likely to be needed in the next few weeks.

Key defender Aymeric Laporte is out until the New Year at least with a knee injury.

And makeshift centre-back Rodri picked up a hamstring problem against Atalanta which will keep him sidelined for at least a couple of weeks.

Stones, 25, said: Its always frustrating going through injuries, it was a big setback. Now Im back. I feel strong and healthy again. Hopefully I can stay fit.

Its been a difficult time but the guys have made a step up. They have done jobs for the team that they are not used to, so I give all the credit to them.

Now we are back, we need to stay fit to help the team to fight for all the competitions.