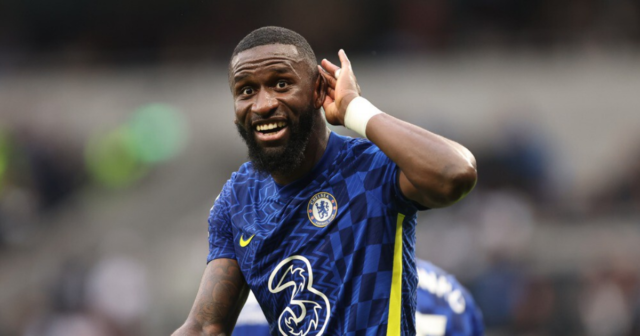 REAL MADRID and Bayern Munich are growing increasingly confident they will be able to land Antonio Rudiger should the Chelsea defender become a free agent, reports say.

The defender wants to stay in west London, but the two parties are far from agreeing on new terms.

Rudiger wants to stay at Chelsea, but the two parties haven’t agreed terms with the German wanting to double his wages

According to ESPN, the current contract stalemate is a confidence boost for the two European giants – who will be able to negotiate a pre-contract from January.

The German could get upwards of £300,000-a-week should he choose to move back to Germany or go to LaLiga.

Juventus and Paris Saint-Germain are also believed to be interested in signing the 28-year-old.

And according to reputable journalist Fabrizio Romano, should Rudiger become a free agent, ‘the race is open.’

Blues boss Thomas Tuchel is still confident the club can tie the defender down to a new deal.

He said last month: “I hope that they find a solution but it’s not only between coaches and players.

“It’s between the club and the player’s agent. He plays excellent for a long time – very consistent [and] at a very high level.

“I feel very calm, very focused and it’s obviously not a distraction for him.

“So give things time – sometimes it needs a bit longer, sometimes things get very fast. There’s no news from my side.”

Tuchel added: “I think Toni feels very, very good at Chelsea. He feels respect from his team-mates, he feels the importance he has in the team. It’s well deserved because he delivers.

“He feels the love from the supporters. He plays in the strongest league in Europe and in a big club, so not many reasons to change. But it’s in good hands. I’m calm and relaxed – whatever has to happen will happen.”

He said: “In principle I am no fan of talking about players who are under contract with other clubs while we are outside the transfer window.

“But I’m talking about Rudiger as a football fan.  He has made fantastic progress.

“Thomas Tuchel has handled him extremely well since taking charge.  He was previously on the scrapheap at Chelsea.

“But now he is one of the most important members of their defence. He has incredibly good fighting spirit, and is a very good defender.

“I always think it’s great when a player lives up to his job description – and that is always the case with Toni.”

Did you miss our previous article…
https://www.sportingexcitement.com/football/premier-league/watch-adele-belt-out-cringey-rendition-of-glory-glory-tottenham-hotspur-chant-ahead-of-west-ham-clash