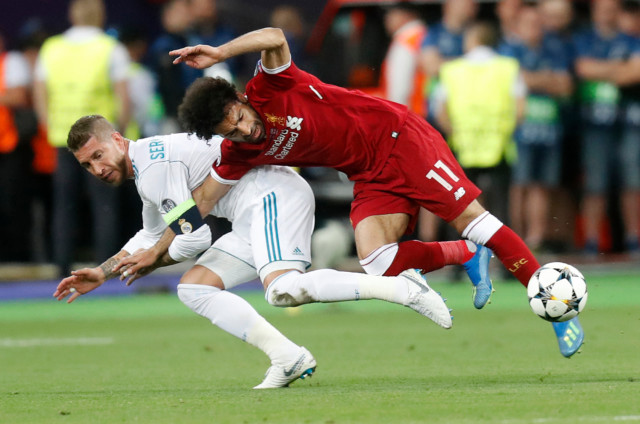 Liverpool have drawn their Spanish rivals in the quarter-finals, with the first leg at the Bernabeu on April 6.

It comes three years after Madrid beat Liverpool 3-1 in the final, in a game Reds fans will remember for all the wrong reasons.

Star forward Salah was replaced after 30 minutes after he collided with defender Ramos.

The Spanish centre-back, 34, appeared to drag down the Egyptian forward, 28, who was devastated after being forced off.

It is sure to be a talking point when the two teams meet again, but iconic left-back Carlos joked Ramos will be nowhere near Salah.

He said: “Salah isn’t even going to get close to Sergio. It will be an incident that will be talked about a lot.”

Liverpool went on to win the Champions League in 2019, but crashed out to Real’s rival Atletico Madrid last season.

Both teams are now off the pace in their respected league runs, with English champions Liverpool currently sixth.

They are also coming off SIX straight home defeats in the Premier League, an unwanted club record.

Carlos, 47, who won four league titles and three Champions Leagues in the Spanish capital, has put huge emphasis on the first leg at the Bernabeu.

He said: “We’re going to play against a good team.

“The first match is at home, and Real Madrid’s form is much better, they must decide the tie at home.

“The important thing is that Zidane has all his players ready, and that the injured ones come back as quickly as possible.”