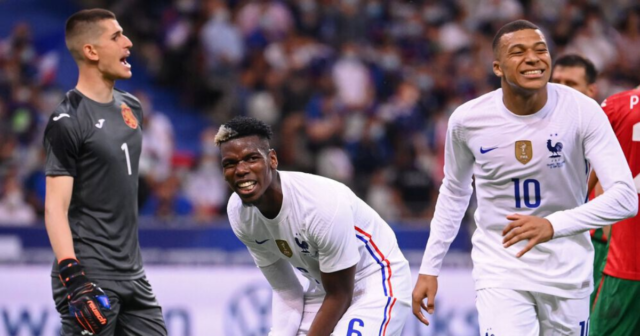 PARIS SAINT-GERMAIN striker Kylian Mbappe will reportedly snub a new deal despite the club looking to bring in Paul Pogba from Manchester United.

The 22-year-old has entered the final year of his contract at Les Parisiens, with the France ace understood to be keen to depart Ligue 1.

Real Madrid are known to be long-term admirers of the ex-Monaco star, with a move to Los Blancos believed to be Mbappe’s top priority.

And according to Marca, the 2018 World Cup winner will refuse to sign a new deal in order to join the LaLiga giants on a free transfer in 2022.

The French news outlet claims PSG were hoping that a possible move for his compatriot Pogba could convince Mbappe to extend his stay.

PSG are keen to prise the former Juventus ace away from Old Trafford with the midfielder also in the last year of his deal.

And he could be available on a cut-price deal if the Red Devils are forced to sell him to avoid losing him for nothing.

But despite his potential switch back to his homeland, it will not be enough to convince Mbappe his future lies in Paris.

It has even been stated that he will not buckle under pressure from fans to agree new terms as he has already made up his mind that he intends to join Real.

Supporters had been hopeful that a new contract could be on the cards after Mbappe posed in their new away kit for the 2021-22 season.

Mbappe was recently urged by Nicolas Anelka to depart France if he wishes to the coveted Ballon d’Or in the coming years.

He said: “You have at least two choices — stay in Paris or move to Real Madrid. Both of them can win the Champions League these days.

“When I was at PSG, that wasn’t the case. That choice depends on what you want to achieve in football.

“If you want the biggest accolades, you will have to move from PSG at some point.

“The best leagues are in England and Spain, so you didn’t compete with the best players in the best league. You will have to decide.

“If you want to win the Ballon d’Or, which is what you should be looking at to echo Cristiano Ronaldo and Lionel Messi, you will have to compete with the best.

“You can’t say you compete with the best all the time when you are at PSG.”

Did you miss our previous article…
https://www.sportingexcitement.com/football/premier-league/man-city-eye-harry-kane-and-jack-grealish-with-bernardo-silva-set-to-be-sacrificed-to-fund-225m-transfers