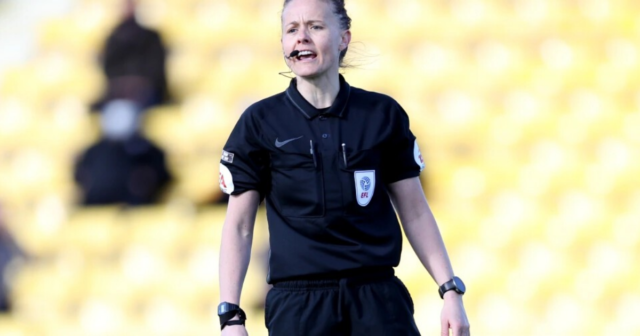 REBECCA WELCH is to rewrite history again as the first female referee to take charge of an FA Cup third round game.

Welch has been appointed as ref of the tie between Birmingham City and Plymouth Argyle on January 8 at St Andrews.

It is the furthest into the oldest cup competition in the world that a woman referee has ventured.

It underlines Welch’s remarkable rise through the ranks of officialdom and the changing face of English football.

She was also the first woman to take charge of an EFL match back on April 5 when she was given the job at Harrogate Town versus Port Vale.

Welch, 38, said at the time that she does not see herself as a trailblazer.

She told Sky Sports: “I’m still trying to let it sink in. I got the news on Saturday and haven’t come back down to earth yet. I’m very fortunate to have been given this opportunity and I’m really excited about it.

“My dad is probably my biggest fan, so he’s over the moon. My mum doesn’t know a lot about football. She’s excited, but I don’t think she knows why! They’re really proud.

“It’s not something I thought that, when I decided to be a referee 11 years ago, I would be in the Football League doing a game. That didn’t even register on my radar.

“It seems to have been a whirlwind over the past 11 years and now we’re a week away from one of the biggest games of my career.

French woman Stephanie Frappart was the referee for a Champions League match between Juventus and Dynamo Kiev.

In March this year she took charge of Holland’s World Cup qualifier against Latvia.