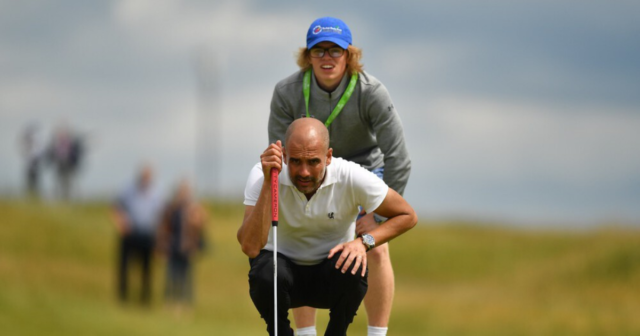 PEP GUARDIOLA would swap half of his incredible trophy haul for a decent golf swing.

The Manchester City boss switches off from the pressures of the title race by going to the course and hitting a few balls.

But the fact his handicap is going UP rather than down is a huge source of frustration.

Asked how he relaxes away from the game, Pep said: “Playing golf — the only thing I switch off completely.

“I don’t see people, it’s just hitting this damn ball — and you cannot hit it.

“I would change half of what I’ve achieved as a manager or player to have a decent golf swing. I’d do anything.”

That is some claim as he is already one of the most successful managers of all-time.

As a player for boyhood club Barcelona, he also lifted five LaLiga titles and the European Cup.

But Pep said: “Olazabal is too nice, my swing is a disaster.

“My handicap is getting worse.

“I don’t have time and the weather is so bad.

The 51-year-old certainly won’t have time to hit the course this week as he prepares for Sunday’s Manchester derby at the Etihad.

He knows victory over neighbours United will go a fair way towards helping City to yet another Premier League title.

When asked what his favourite part of the job is, Pep said: “The glass of wine when you win the game.

“And the toughest? You don’t sleep good after a defeat.”

During his 5½ years in England, the City boss has often been complimented on his fashion sense.

But he admits that is all down to his missus Cristina, who runs a boutique back in Barcelona.

Cristina chose the ‘coat-igan’ he wore as his team swept to a domestic treble back in 2018-19, before auctioning it off to raise cash for the club’s charities.

Guardiola added: “My wife is so elegant, she helps me a lot. Absoutely she chooses.

“Before her I was a disaster. Now I’m elegant — thank God for her.

Having booked a place in the FA Cup quarter-final thanks to Tuesday’s 2-0 win over Peterborough, Pep’s thoughts will have immediately switched to the derby.

He has a squad packed full of quality players, who would play every week for most teams in the Prem — but not the reigning champs.

Guardiola also believes keeping on board the stars he leaves out — or asks to sit on the bench — is key to what he has achieved at the Etihad.

He told Sky Sports: “If you are able to have the group as a unit and handle the guys who don’t play, you will be happy.

“If there is turmoil in the locker room or a mess, you’ll be unhappy and no success.”