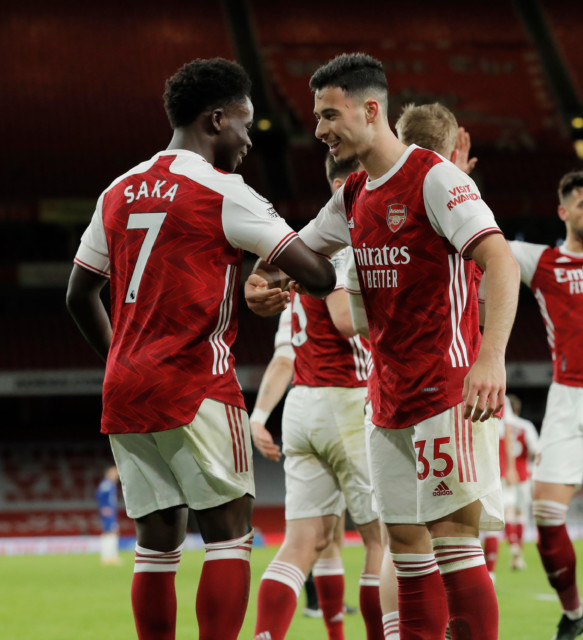 RIO FERDINAND has tipped young guns Gabriel Martinelli and Bukayo Saka to get Arsenal firing with their ‘scary relationship’.

The Gunners arrested their alarming Premier League form by beating Chelsea 3-1 on Boxing Day as Mikel Arteta’s gamble on youth paid off.

Rio Ferdinand has been wowed by Gabriel Martinelli and Bukayo Saka

Manchester United legend Ferdinand was impressed by what he saw, with teenagers Martinelli and Saka catching his eye.

“Him and Saka together, they have a link up and a relationship that’s already there that I think in years to come will be a scary relationship. Scary!

“They work so well together. And Tierney as well backing it up. But Martinelli, I have to say is going to be a tremendous footballer. Top player.”

Arsenal saw off competition from a number of clubs to sign Martinelli – who was rejected by Manchester United after trials – from Brazilian minnows Ituano in July 2019.

The 19-year-old forward had fans purring as he hit ten goals in 26 appearances in his debut season before a knee injury sidelined him for nearly six months.

He returned to first-team action earlier this month and has started Arsenal’s last three games.

Ferdinand added: “He has come back into this team and he is showing what all the fuss was about before.

“He is going to be a huge, huge player. Massive talent. I just hope he can stay fit.”

Arsenal made it back-to-back league wins for the first time since September by beating Brighton last night.

Alexandre Lacazette hit the only goal of the game less than a minute after replacing Martinelli following some brilliant wing play by Saka.

Arsenal have climbed to 13th in the Premier League table thanks to their bumper Christmas haul.

Did you miss our previous article…
https://www.sportingexcitement.com/football/premier-league/ex-bolton-ace-ivan-klasnic-awarded-3-6m-after-winning-decade-long-legal-fight-against-werder-bremen-over-kidney-damage