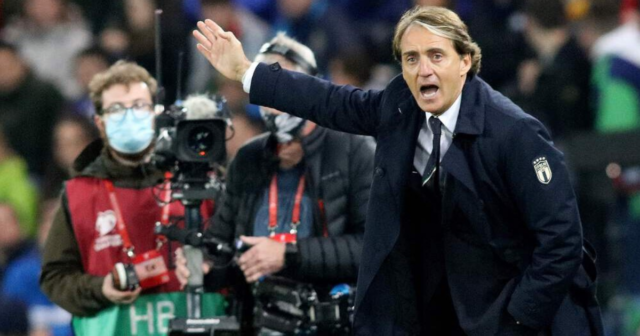 ROBERTO MANCINI has denied he’ll be Manchester United’s next boss.

The Italy and ex-Man City chief rejected claims he has a ‘verbal agreement’ to take over at a Premier League club.

And despite being linked with United last week Mancini is adamant his ‘only goal’ is to win the World Cup.

The 57-year-old is under contract with the Azzurri until 2026 but faces a tough play-off fight to qualify for the Qatar finals next year.

Nonetheless, he scoffed at suggestions he might soon return to the Prem after winning the top-flight once and FA Cup with City from 2009-13.

“My only goal is to get to the World Cup and be able to win it.”

Ralf Rangnick is currently United’s interim boss until the summer but it was thought Mancini was in contention for the permanent job after that.

His priority, though, is helping his home country overcome a disappointing World Cup qualifying campaign.

The Azzurri only finished runners-up behind Switzerland in their qualifying group.

So to reach Qatar they now must beat North Macedonia at home in the play-off semi-finals next March, then win at either Portugal or Turkey.

Mancini admitted: “Things didn’t go so well in the qualifying round, but we have to accept that.

“We have to roll up our sleeves and start again.

“We still have a chance. Of course, the draw was not beautiful but we are the champions of Europe and we can win the first game and then play the final play-off.”