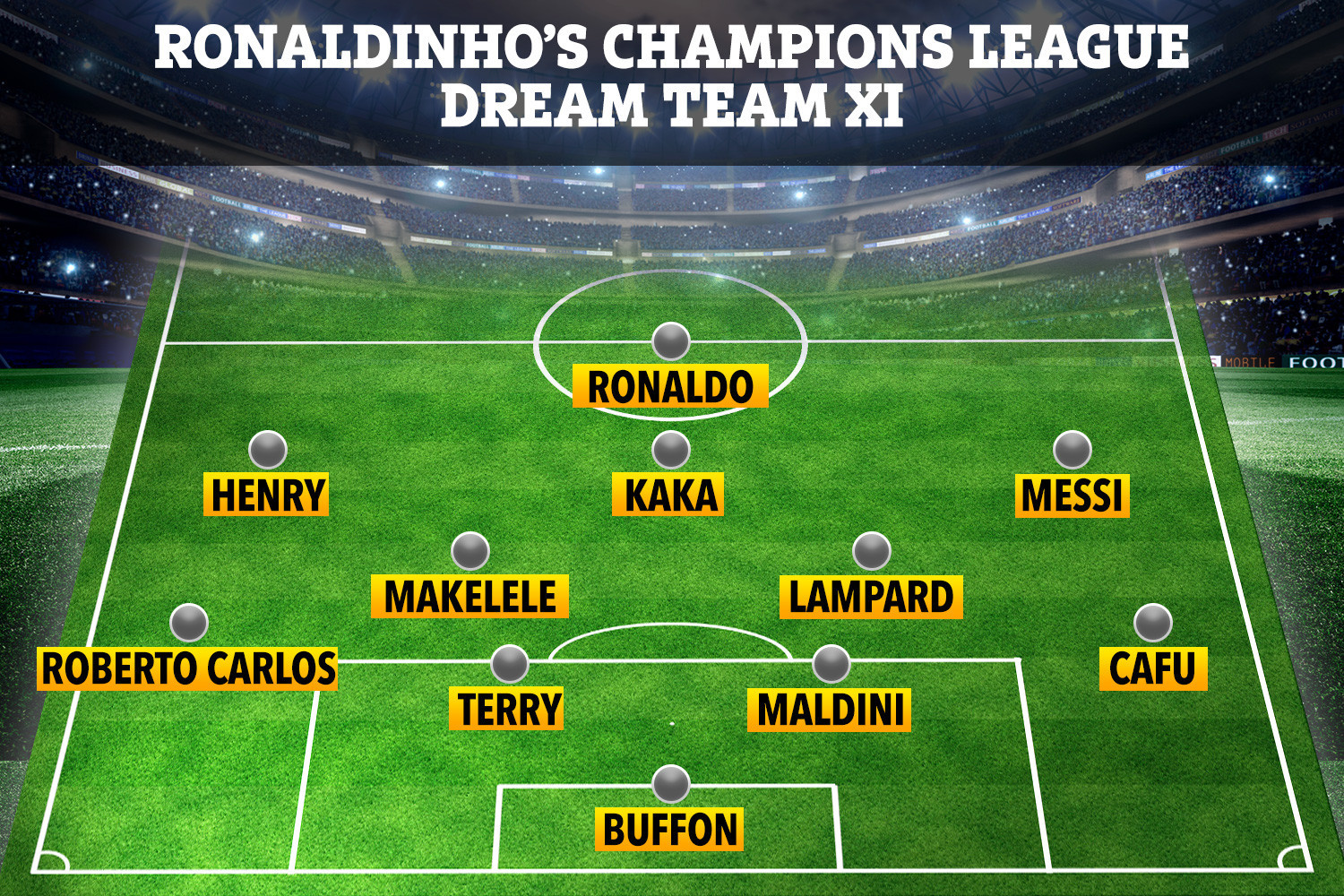 PARTY-ANIMAL Ronaldinho celebrated his 40th birthday with a monster BBQ… in prison.

The Brazil legend is currently behind bars for allegedly using a fake passport to enter Paraguay.

Down the years, Ronaldinho has enjoyed some incredible birthday bashes, including his 26th – when he partied until 6am – and his 32nd, which lasted five days and cost tens of thousands of pounds.

This year was a more tame affair…

But to celebrate his milestone birthday, we’ve taken a look back at his favourite all-time Champions League XI.

Picking the team back in 2015, the happy trickster couldn’t resist a strong Brazilian flavour.

Check out who makes the cut, and who doesn’t, below – with only one of Cristiano Ronaldo and Lionel Messi named…

QUITE possibly the greatest goalkeeper of all-time, Buffon is still going – back at Juventus – at the age of 42.

Buffon has made 117 Champions League appearances, keeping 47 clean sheets in his glittering career.

Incredibly never won the tournament as Juventus’ quest for a first crown since 1995-96 continues.

He played 54 times in Europe’s elite competition across six seasons in Italy and won the title in 2006-07.

The England legend knows all about Ronaldinho too, having scored a late goal to cancel out the Brazilian’s stunning strike in the 2005 last-16 tie at Stamford Bridge.

ARGUABLY the greatest centre-half to ever lace up a pair of boots, Maldini was famously the defender who “never tackled”.

Maldini played in EIGHT Champions League (and European Cup) finals – winning five – including bouncing back from losing the Miracle of Istanbul in 2005 to beat the same Liverpool side two years later.

The Brazilian played 103 times in the Champions League with Real Madrid and Fenerbahce, winning twice with the LaLiga giants.

THE second of three Chelsea player on the list, Lampard makes the cut over the likes of Xavi and Andres Iniesta – the Brazilian’s former Barcelona team-mates – in the team.

Lampard, now boss at Chelsea, played 105 times in the Champions League, winning the 2010-11 trophy to boot.

The attacking midfielder was at his peak in the mid-00s, during his time at AC Milan and Real Madrid – but won just one title, the 2006-07 triumph.

BEFORE N’Golo Kante came on the scene, Makelele was the man making CDM sexy again – with the position even known as “The Makelele Role” to this day.

During his time at Chelsea and Real Madrid, the Frenchman played 84 times in the Champions League, winning the crown in 2001-02.

RONALDINHO assisted Messi for his first-ever professional goal – and the pair tore things up in Spain for years afterwards.

A man who needs no introduction, Messi has made 141 Champions League appearances to date, winning four titles across 16 seasons.

THE “original”, Brazilian Ronaldo makes the team in place of Cristiano…

Ronaldo played 40 times in the Champions League with Real Madrid and Barcelona, scoring 14 times but never winning the trophy…

Spent many years with Inter Milan, then in the Europa League.

FINISHING off the XI is Arsenal legend Henry.

The Gunners hero played 73 times in the Champions league, scoring 35 times – but never won the trophy with Arsenal, before finally winning towards the end of his career in Barcelona.