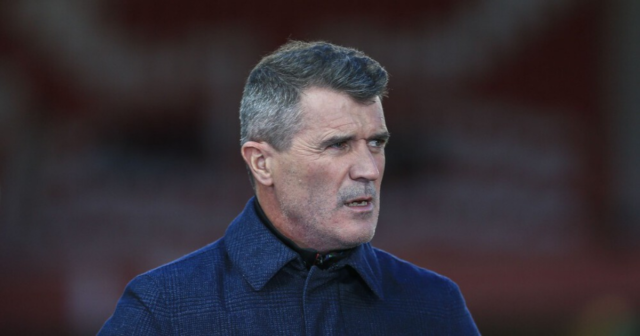 The 50-year-old has urged the next permanent manager to clear out the deadwood following the 2-2 draw against Aston Villa on Saturday evening.

United are in real danger of finishing outside the top four having won just once out of their last four Premier League games.

And Keane has named just three players he would build the team around he stressed ‘hungry’ and ‘quality’ players have to be brought to Old Trafford.

Keane was on punditry duty for Sky Sports as United blew a two-goal lead at Villa Park.

Speaking after the match, the Irishman was asked by Jamie Redknapp how many players he could rely on from the current squad.

Replying, Keane said: “How many would I keep you mean? I don’t know, I really don’t.”

Presenter David Jones then pressed Keane on whether he would keep Bruno Fernandes.

To which Keane replied: “Yeah. Oh yeah Bruno, people like [Cristiano] Ronaldo, it’s not all doom and gloom.

“You have [Raphael] Varane, you have some good young players there.”

Interjecting, Redknapp then suggested how Rangnick isn’t sure about the full-backs with deputees Diogo Dalot and Alex Telles given game time in recent weeks.

Commenting on Redknapp’s point, Keane stated how the next permanent manager must move on some players.

He remarked: “Obviously not. But of course a new manager has come in, he might be thinking I fancy the job.

“But I’m on about if a top coach comes in, at least for a good starting point, you might look at some of the senior players and go at least their contracts are up.

“I can move them on and get some fresh, hungry quality players into Manchester United.”

Keane then stated how Marcus Rashford, who was absent for the draw against Villa due to injury, looks ‘lost’ whenever he appears for the club.

He said: “He’s done amazing things over the last few years, amazing, on and off the pitch, but clearly there’s something amiss.

“I looked at him Monday night [in the FA Cup against Villa and thought], ‘The lights are on but no-one’s home’. The kid looks lost. There’s something amiss.

“Sometimes with young players it’s confidence, it might be anything to do on the football pitch, it might be stuff off the field.