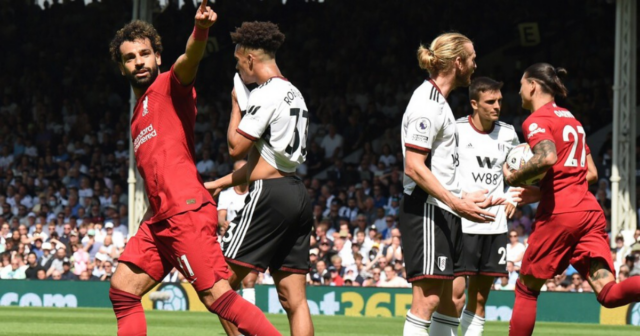 Not only did Salah score on the opening weekend of the season for the sixth year running, he put himself in the history books.

The Egyptian now has as many goals on on the first weekend of the new campaign as Frank Lampard, Wayne Rooney and Alan Shearer.

Salah, who signed a new three-year this summer, was on the scoresheet with new strike partner Darwin Nunez.

But Aleksandar Mitrovic’s double in between threatened to give Fulham a shock win.

Liverpool boss Jurgen Klopp hit out at his side post-match and revealed a half-time rollocking he gave his players.

Klopp said on BT Sport: “The best thing about the game is the result, that we get a point from a really bad game from my side.

“The attitude was not right in the beginning, we wanted to fight back but we don’t find it as easy any more.

“The result is fine, we don’t deserve more than that but the performance is massively improvable.”

Asked what he told his players at the break, Klopp replied: “You can’t always hug the boys.”

He added: “We do that usually when they deserve it and the first half – it’s not that they didn’t but when you start a game the opposite of how we want to start it’s difficult.

“Everybody was under pressure, we couldn’t really break the lines.

“We never had momentum, we could have won the game as we had the bigger chances but that would have been too much.”