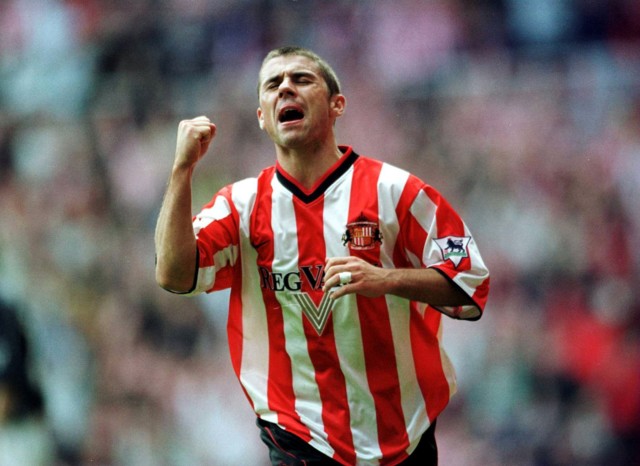 KEVIN PHILLIPS recalls it was the words of a  Toon legend that spurred him on to hit 30 Premier League goals for Sunderland.

Alan Shearer had claimed no other player would match the feat he achieved three times with Blackburn.

Despite Sunderland usually struggling, Kevin Phillipps was still among the top scorers in the top flight 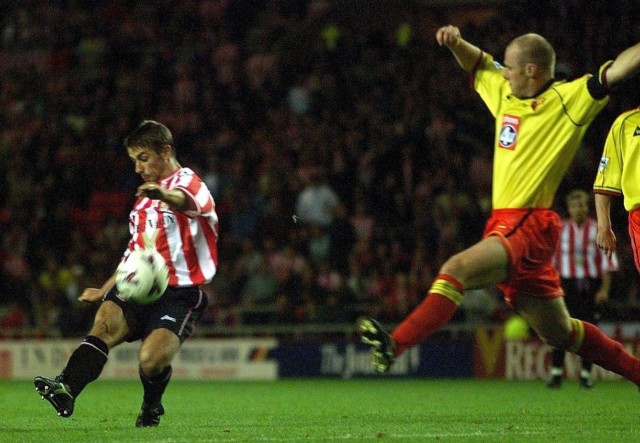 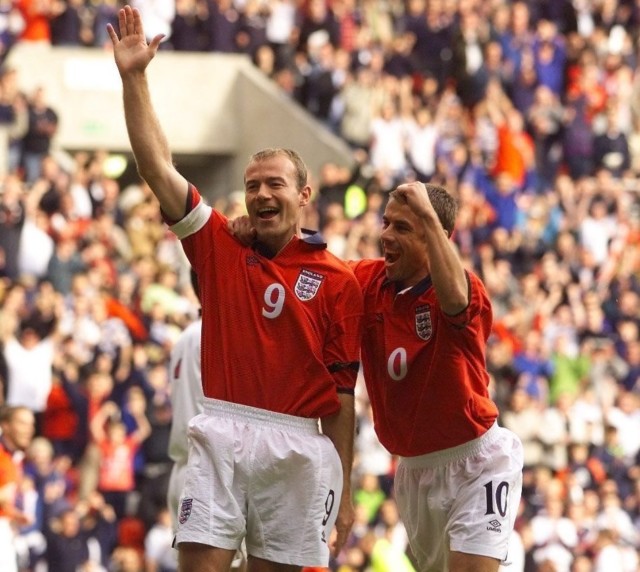 But Phillips did manage it in his maiden top-flight campaign 20 years ago  and scooped the Prem’s top-scorer gong.

It also saw the Black Cats hero awarded the European Golden Shoe for being the most deadly marksman on the continent.

Philips remembered: “After Al had said he didn’t think another player would score 30 league goals, I was desperate to get to that.

“When I was on 29, I went a few games without scoring and it was   towards the end of the season.

“I never even thought about a European Golden Shoe. I didn’t even realise at that time it existed!”

Phillips has both his Premier League Golden Boot and European trophy sitting in pride of place on his mantelpiece — while also lending it to the Sunderland fan museum from time to time.

His feat in the 1999-2000 campaign was phenomenal and he puts it down to being afforded more chances than normal for a promoted side, his  partnership with 6ft 4in Niall Quinn and his own unerring self-belief.

The former England striker, 46, told SunSport: “I was always confident in my own ability  but I didn’t envisage I would score as many as I did.

“I have to give loads of credit to my team-mates who gave me so many opportunities.

“I was very surprised by the amount of chances we created — I got two or three chances a game.

“At the time I think we took the Premier League a little by surprise with our little and large combination between myself and Niall.
“I’ve always said the goal never changes, it stays the same size.

“There’s always going to be one person between the sticks — and it’s about trying to remain calm when you get that opportunity.”

Phillips, who stood 5ft 7in, actually had a slow start to his Sunderland career, netting four goals in his first 15 games in the old First Division.

The turning point came in a 4-1 defeat at Reading, which had the fans and manager Peter Reid raging.

From then on, as Reid picked a settled side, the team went on a roll and Phillips could not stop scoring.

He hit 29 league goals in his first campaign, which ended in heart-breaking play-off final defeat to Charlton, then 23 in the following season which finally saw the Black Cats promoted.

Despite those impressive figures, there were  many that doubted he could replicate it in the big league.

Rodney Marsh, then a prominent Sky pundit, famously predicted that Phillips would struggle to score “five or six” in the top flight.

Phillips recalled: “I loved that sort of pressure and thrived on it.

“Ever since being shown the door by Southampton as an 18-year-old — and telling manager Chris Nicholl that I was going to prove him wrong — I had that belief in me  I would always succeed.

“When I heard Rodney say that, I thought  fair enough — but  I’m going to prove you wrong.
“It was nice to ram it down his throat after about five or six games.

“It’s just  a shame I’ve never bumped into him ever since!”

Marsh’s tip did not look under threat on the opening day, as  Sunderland were thumped 4-0 at Chelsea, with Phillips touching the ball about “four times”.

But he notched a double in a 2-0 home win over former  club Watford three days later — and from then on the goals were flowing.

Possibly his most memorable goal that season came in the Tyne-Wear derby in August, when Shearer was famously dropped by Ruud Gullit.

SO MANY TOP RIVALS

Phillips netted a brilliant chip to win the game with 15 minutes to go — and Gullit quit days later.

Phillips said: “You knew things couldn’t be good in their camp if they were dropping their top striker for their biggest game of the season.

“We were desperate to put a final nail in the coffin. Nothing personal to Gullit, but as local rivals you want to upset them as much as you can.

“Reidy didn’t  give a team talk, he just pinned their team-sheet up on the board with Shearer circled.”

Phillips then hit his only hat-trick of the season in a 5-0 win at Derby to land the Player of the Month award for October.

But it was his knack for bagging braces, EIGHT across the campaign, that saw his tally soar. Other standout moments were scoring in front of the Kop, a revenge double against Chelsea — and  two at home to  Newcastle which sparked “the best atmosphere” he had ever witnessed.

Phillips also started for England alongside Shearer in a 2-1 win over Belgium at the Stadium of Light, where the Newcastle captain netted an overhead kick.

The Black Cats legend beamed: “When Kevin Keegan pulled me aside and told me I was starting up top with Alan,  I wanted to be the top dog in front of my home crowd.

“It would have been great if the roles had been reversed  but he was a world-class finisher.

There was  a bit of rivalry there. Maybe he could have passed to me more! But you don’t get to the top as a striker without a bit of selfishness about you.”

Phillips could have moved on after his stunning season, with a few clubs showing interest,  but instead penned the biggest contract Sunderland had ever offered a player at the time.

He has no regrets — but does feel if he was playing for a bigger club he would have had more than his eight Three Lions caps.

Phillips certainly believes that would be the case if he were playing today. Although  he admits that the modern lone-striker role would not suit  his game.

The former Aston Villa and Crystal Palace star said: “Whenever I do sportsman dinners, someone always asks if I felt I should have won more  caps.  I answer that  in two ways.

“Second, I am proud to have won my eight caps in competition with  elite players and that was playing,  no disrespect, for Sunderland.

“At the end of the day, yes, I probably feel I should have had at least another six or seven caps — and should have been given a run-out at Euro 2000. If I was at my peak, who could I reel off today that I  feel would give me major competition? Not many.”

Phillips was also crowned the best marksman in Europe.

Yet he recalled: “The night of the do in Switzerland I couldn’t go, so someone from adidas just gave it to me before a game the next season.

“It was  shake hands, get the  trophy, and that was it. Which was a bit disappointing, being the only Englishman to have ever won it.

“But  I’m still very  proud of what I achieved.”