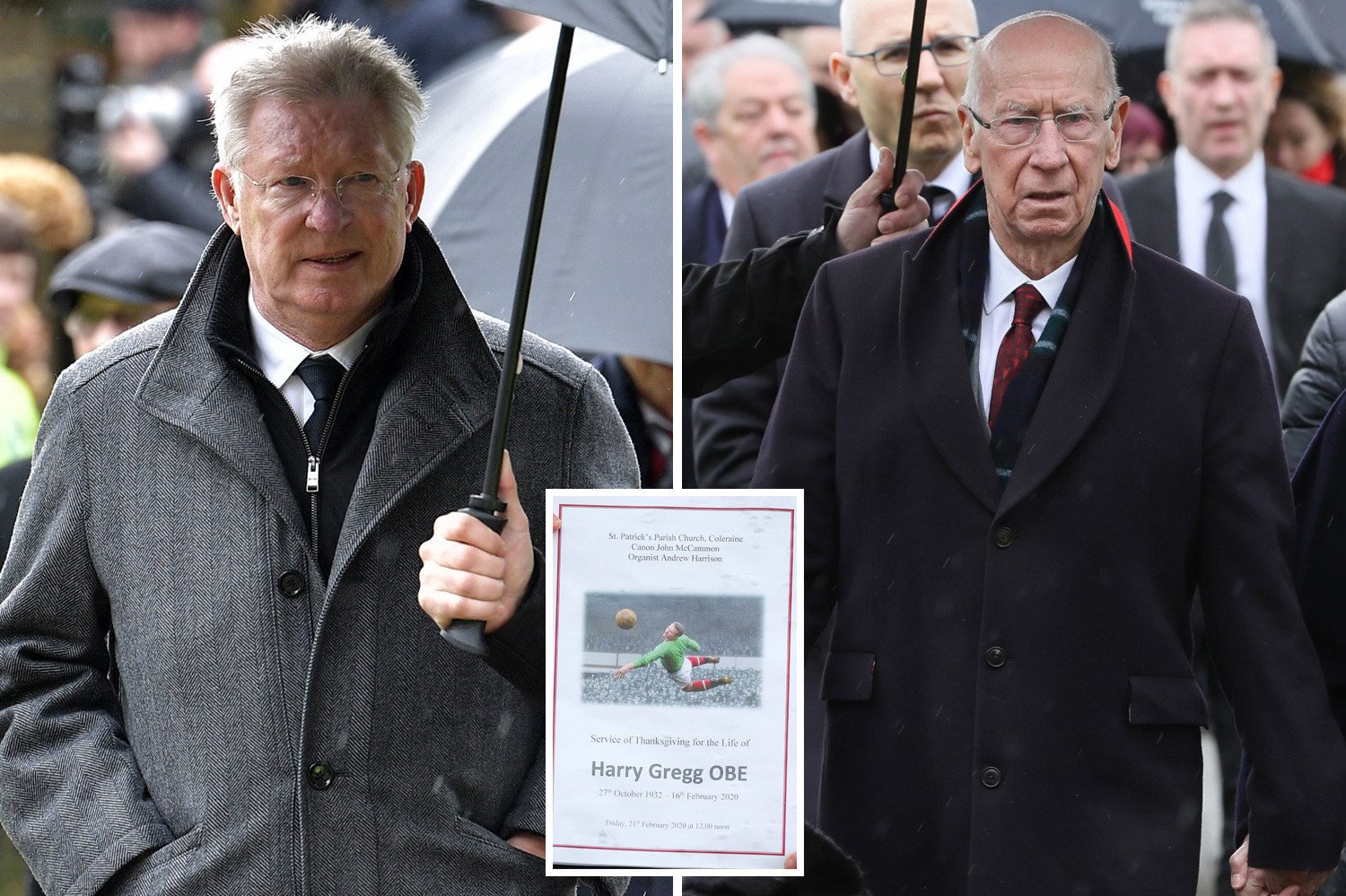 MANCHESTER UNITED greats Sir Alex Ferguson and Sir Bobby Charlton were among mourners who gathered for the funeral of club icon Harry Gregg.

The Old Trafford side’s Munich Air Disaster hero, who saved Sir Bobby from the wreckage, died last Sunday at the age of 87.

Denis Law was the other United star who attended the service at St Patrick’s Parish Church in Coleraine, Northern Ireland.

Former goalkeeper Gregg, who made 25 appearances for his country between 1954 and 1963, bravely rescued trapped team-mates from the 1958 crash in which 23 were killed.

Welcoming mourners, Rev Ian Ballentine, praised Gregg for being an “outstanding professional footballer and a man of exceptional courage”.

The Irish FA opened a book of condolence in his memory at the National Stadium at Windsor Park.

Gregg survived the Munich crash and twice returned to the burning fuselage to drag team-mates to safety.

Sir Bobby, Dennis Viollet and a 20-month-old baby plus her badly injured pregnant mother were all pulled from BEA Flight 609 by Gregg.

BBC NI sports presenter Stephen Watson, who delivered a eulogy, said Gregg was tormented by guilt and grief after Munich.

He said: “Harry Greggs notoriety because of the Munich air crash came at a price it cast a shadow over his life that he found difficult to dispel, but he always carried it with grace.

“Harry was determined that even though Munich shaped his destiny, it would not shape his life.

“Harrys actions, though, on the runway that fateful day meant he transcended sporting greatness.

“He was called the Hero of Munich, but he always wanted to be remembered simply as a footballer and a coach of some repute.

“In his own words: Im Harry Gregg from 34 Windsor Avenue in Coleraine who played football I was useful on some days and rubbish on others. Thats how I want to be remembered. Not for something that happened on a spur of a moment.

“Harry Gregg. What an incredible man, and what a remarkable life. We will never forget you. We celebrate your life today.”

In nine years at United, Gregg played 247 times, including in a 3-0 win over Sheffield Wednesday just 13 days after the Munich tragedy.

Gregg became the worlds most expensive goalkeeper when Sir Matt Busbys United paid Doncaster 23,000 in 1957 and he was voted the best keeper at the World Cup a year later.