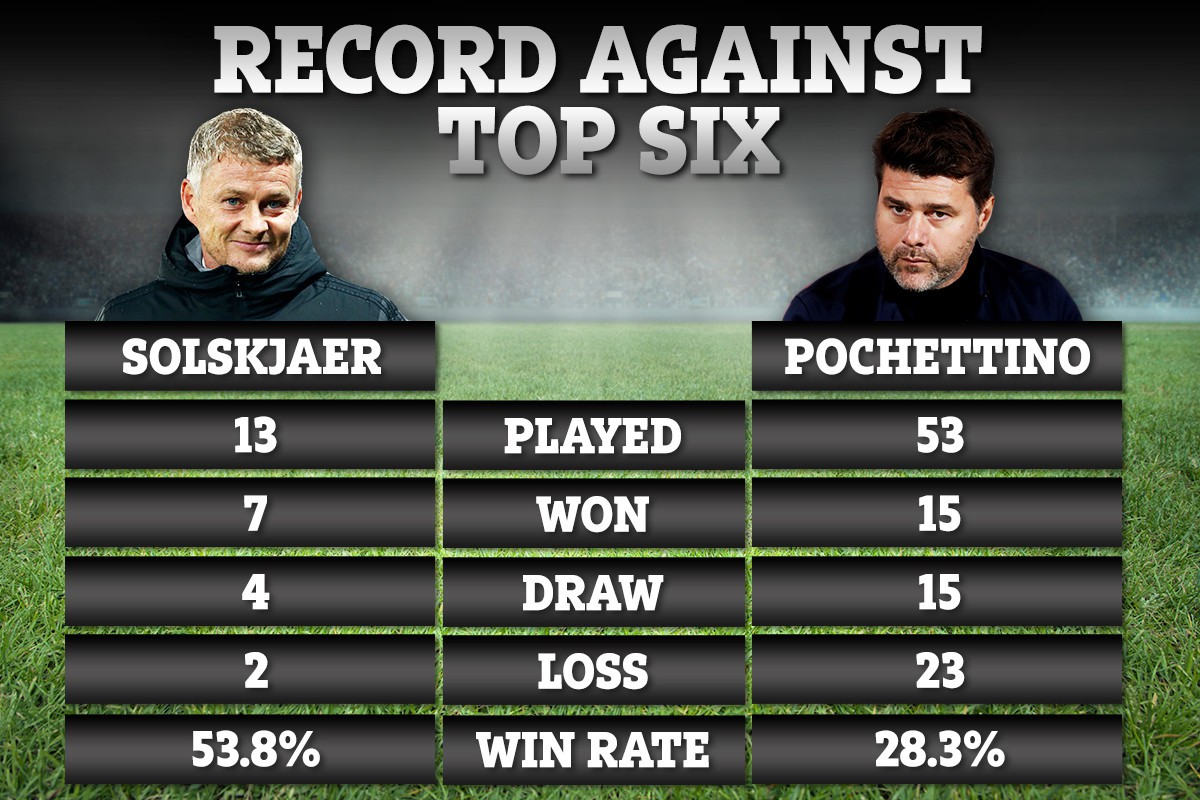 OLE GUNNAR SOLSKJAER’S brilliant record as Manchester United boss against the top six makes the case that he is a better option than Mauricio Pochettino.

Old Trafford legend Ole was facing calls for the sack after drab draws against promoted Sheffield United and Aston Villa – with many tipping Poch as the perfect replacement.

But the derby win over Man City on Saturday night coupled with a 2-1 triumph over Spurs capped a remarkable four days for 46-year-old Solskjaer.

Really, though, as the stats show, it should come as no surprise.

Since taking charge at Old Trafford, Solskjaer has overseen 13 games against the big six.

He has won seven, drawn four and lost only two for a win rate of 53.8 per cent.

His side have scored 19 goals and conceded 11, producing a loss rate of just 15.4 per cent against supposedly the toughest opposition.

This season they have beaten Leicester, City, Chelsea and Spurs.

Funnily enough it is Jose Mourinho‘s current Tottenham team who appear to be Solskjaer’s victim of choice.

He has a 100 per cent win rate against the North London side since taking over, the most recent coming courtesy of Marcus Rashford’s double last week.

IS POCH REALLY A BETTER OPTION?

Compare Solskjaer’s record with Pochettino – who admittedly played many more games against the top six – and the difference is striking.

Out of 53 fixtures, unemployed Poch, who is among the bookies favourites to be the next Manchester United manager should Ole be axed, won just 15 for a dismal win rate of 28.3 per cent.

Moreover his loss rate was 43.4 per cent and in 11 games against Liverpool he managed just one win.

On the flip side of Solskjaer’s impressive run, however, is a poor track record against the lower teams.

Of the bottom six, United have lost to two of them and drawn against two more.

That is why Solskjaer has pledged to work on the mentality of his players.

He wants to ensure it is not just against the big teams that they shine – after beating four of the top six this season and being the only side to take a point off Liverpool – but everyone.

The Norwegian said: “If it’s a mental thing, then we can sort it out. We’ll work with the mentality of the boys.

“If the boys are telling me they can’t get up for these games then we’ve got a problem.

“Then I’ve really got to work with them because, when I played, that’s how we won the league.

“We never gave points away against the lesser teams.

“The Premier League is difficult. If you don’t have that mentality you won’t get results.

“That’s up to me, to make sure that for every single game they know they have to earn the right to win.

“Sometimes you’ve got to earn it by passing quicker, winning the ball back – there are different ways of winning games.”

United will have the chance to do just that when they host Everton on Sunday afternoon.

The Toffees are riding high after beating Chelsea 3-1 under interim boss Duncan Ferguson but remain just two points off the relegation zone.