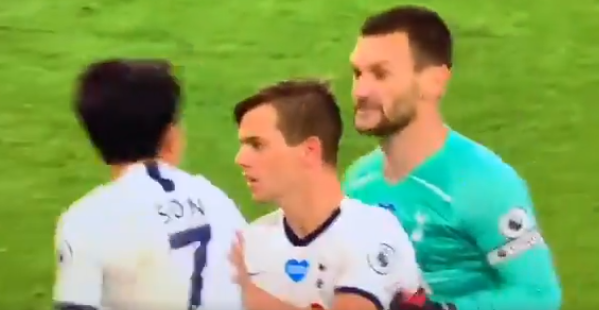 The Spurs pair had to be separated as cameras caught them shouting and pushing each other at half-time of the 1-0 win over Everton. 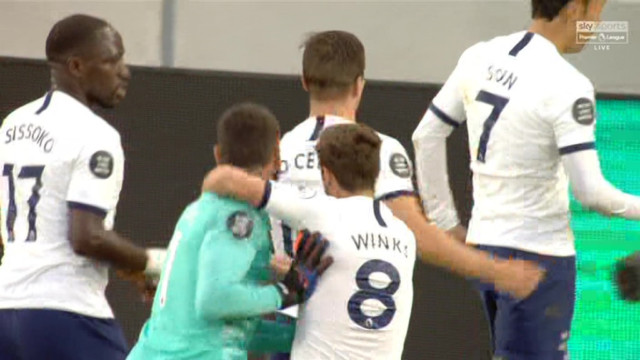 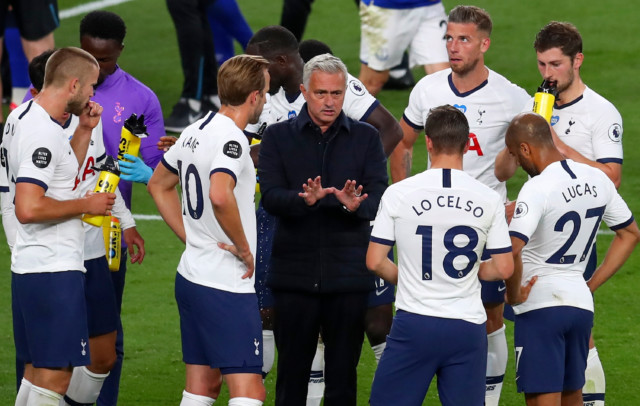 But rather than criticise his players, Mourinho LOVED what he saw – and wants his players to be more demanding of each other.

“It’s probably a consequence of our meetings and if you want to blame somebody for that it’s me, because I was critical of my boys for not being critical enough of themselves with each other.

“I asked to be more demanding, to demand more from others, to put their colleagues under pressure, to give everything for every body.

“And there was a situation at the end of the first half where a kid everybody loves, Son, a team boy, where the captain felt he had to do more in the last minute of the first half, to give more effort than he did.

“A couple of words is something very important to get the team to grow up, to demand from each other, to be strong personalities.

“So at half-time I was really pleased.” 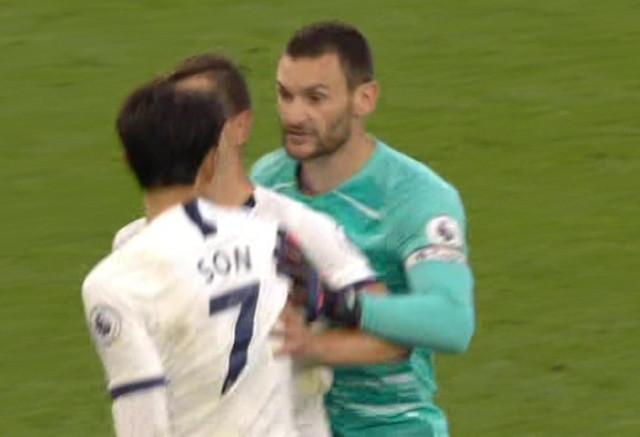 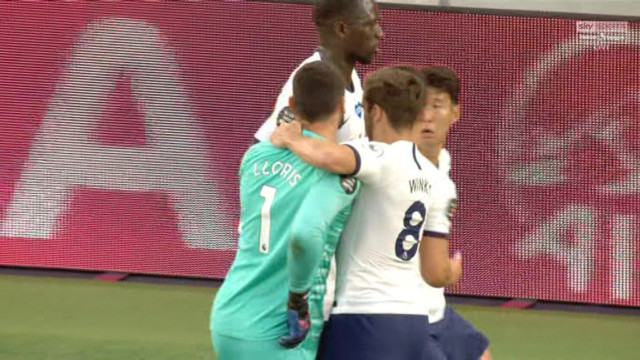 Son looked terrified as a raging Lloris went after him

Captain Lloris and South Korean star Son had to be separated by team-mates Harry Winks, Moussa Sissoko and Giovani Lo Celso after cameras caught their row as the half-time whistle blew.

Mourinho’s men picked up all three points on the night, winning 1-0 thanks to a Michael Keane own goal in the 24th minute.

But undoubtedly the biggest talking point came when the half-time whistle blew as captain Lloris, 33, and Son, 27, went at each other.

The fracas appeared to stem from Son not tracking back when a pass to him was intercepted by Yerry Mina – setting up a Richarlison chance.

Commentator Gary Neville said: “I wish they’d shown that much desire on the pitch.”

Tempers settled down before the second-half though as Lloris – who recently bought a £15,000 guard dog – and Son were shown hugging in the tunnel. 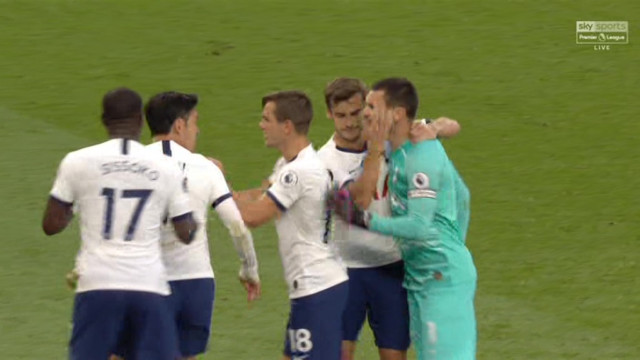 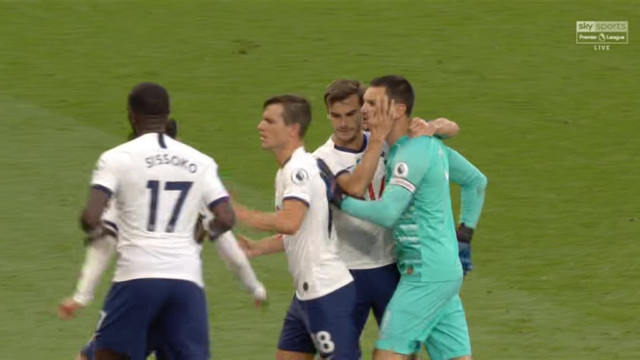 Spurs skipper Lloris later said the incident is “just part of football sometimes” and insisted there is “no problem at all.”

The World Cup winner said: “It belongs in the changing room. Outside you can say whatever you want, there is a lot of respect between all the players.

“What happened between me and Sonny is just something that is part of football sometimes but there is no problem at all.

“You can see at the end of the game we are more than happy to be part of the team and get the three points.”

Asked if it was about his lack of tracking for the Richarlison chance, Lloris added: “Yeah. We conceded a chance a few seconds before half-time because we didn’t press properly.

“That annoyed me but it’s part of football and we won.” 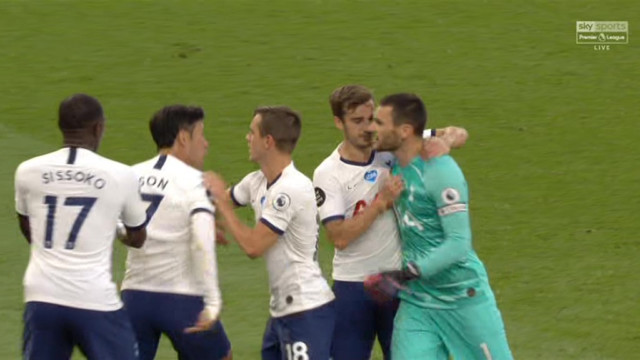 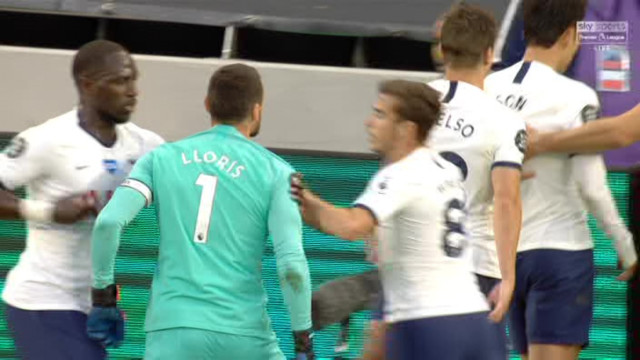 Sissoko and Winks rush in to try to calm the situation

Like Mourinho, former Everton star Tim Cahill also had no problem with what he saw.

The Sky Sports pundit said: “I like it. [Lloris] talks about Sheffield United but he talks about words like ‘team’ and ‘together’.

“He’s holding players accountable. Whether it was Son or [Eric] Dier or whoever it was, he’s out there as captain and leader – his voice is important in times of distress.

“They’ve got the result. He’s setting his standard and he’s going to lead on the pitch whether the players like it or not.

“In my opinion, I like this because he’s the captain and demanding respect and accountability to close players down and do your job because against Sheffield United they didn’t do it.” 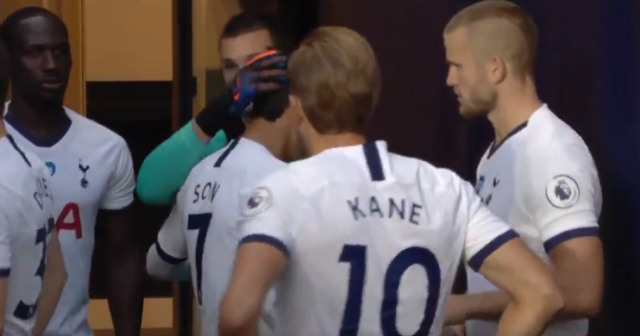 "A little cuddle, all friends again in the Spurs team."

Hugo Lloris and Son Heung-min appear to have made up during the interval.

Fellow pundit Jamie Redknapp said at half-time: “He [Son] gives up, he absolutely gives up on it.

“There’s a reaction as Lloris then shouts at Son – this is probably the most exciting thing that’s happened in the first half.

“But that actually might be a consequence of what happened in the Sheffield United game when he didn’t make a challenge.

“Lloris runs up to him, he pushes Lo Celso in the way almost.

“I’ve been involved with this before – Steve McManaman and Bruce Grobbelaar.

“In a way, at least it shows they care because against Sheffield United they didn’t, there wasn’t enough of that. 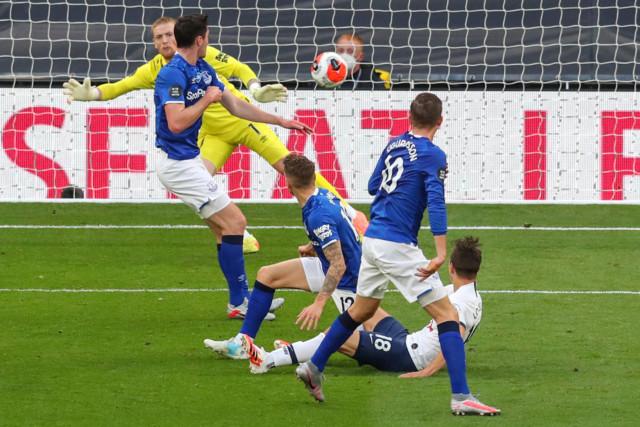 “You’ve got to have that sometimes – it’s not the first time it’s happened in football and it won’t be the last.

“You want to see players showing a bit of passion.

“It was too easy – he’s got to get back and help his team out and he didn’t.

The former Liverpool and Spurs star added after the game:

“To a certain extent it does the manager’s job as well because half-time for Jose, he hasn’t really got to say a lot because the players have done it for him. 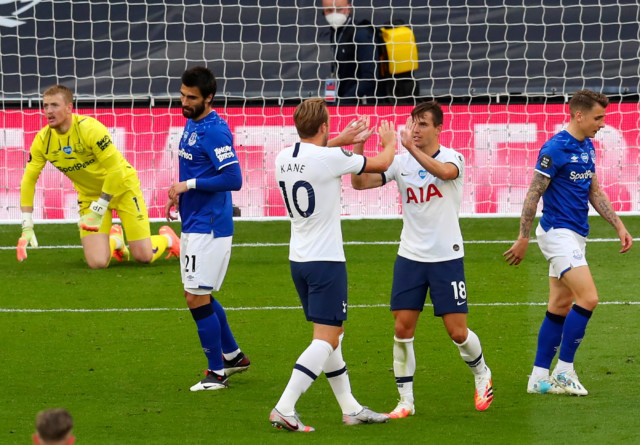 “The good thing is they’ve made up, they’ve been grown up about it and it’s happened throughout football.

“I’ve seen it on the training ground, I’ve been involved in games when it’s happened. It’s part of football.

“But the most important thing is once it’s done, it’s done. He feels like Son’s not done his job and Son’s taken it well.

“Sometimes you have to tell people the truth.

“There will have been a few words said in the dressing room. McManaman and Grobbelaar got very heated in a derby game.

“They are proud men but afterwards they shake hands and get on with it, they’re professionals. You want to win, it means so much.”

Fans joked Lloris could have picked on someone not trained in warfare.

Son received a ‘Best Performance’ award for coming top in his group during military training in his native South Korea.

An intense schedule saw the forward take part in a host of different activities including shooting and bayonet skills, chemical, biological and radiological training, individual battle and first aid training.

But it was the shooting where Son most excelled, hitting ten out of ten targets.

Did you miss our previous article…
https://www.sportingexcitement.com/football/premier-league/how-chelsea-could-line-up-at-crystal-palace-with-kante-and-kovacic-out-but-will-jorginho-finally-get-his-recall