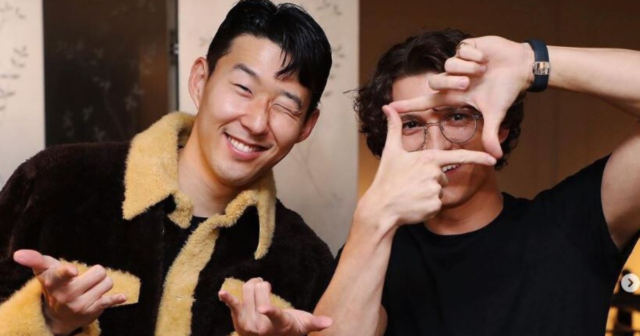 SON HEUNG-MIN struck a Spider-man celebration against Norwich after meeting the Hollywood actor who plays the Marvel Action hero.

Lucas Moura and Davinson Sanchez had already put Antonio Conte’s team two up before Son sealed a 3-0 victory over the Canaries with 13 minutes to go.

The attacker went sliding off on his knees to celebrate before striking a pose with his hands – which was in honour of the iconic Spider-man movie character.

Silverscreen star Tom Holland is playing the action hero in the latest chapter of Spider-man.

And the 25-year-old British actor got the opportunity to meet Son this week in London while promoting the upcoming release earlier this week.

Their chance meeting was shared on social media as the two posed alongside each other – and Son seemingly decided to dedicate his strike to Holland by striking the same Spider-Man after scoring.

Holland recently revealed he is a Spurs supporter.

That was despite previous pictures of him wearing an Arsenal club kit during his childhood emerging online.

The Spider-Man actor will return to the cinema screen this Christmas.

Marvel have confirmed that ‘Spider-Man: No Way Home’ will be released on December 17.

Did you miss our previous article…
https://www.sportingexcitement.com/football/premier-league/mortal-sin-man-utd-blasted-over-donny-van-de-beek-snubbing-by-ajax-manager-erik-ten-hag