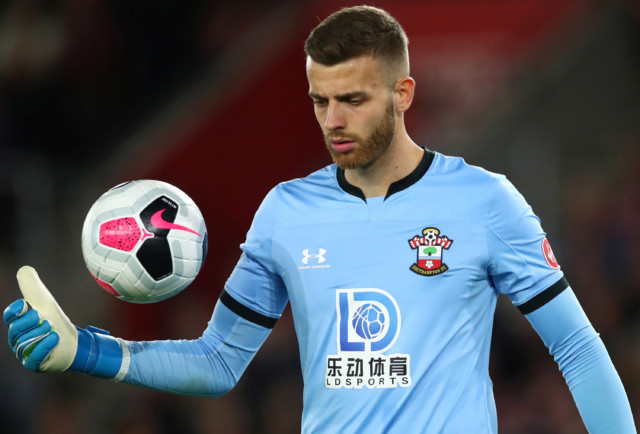 SOUTHAMPTON are looking to ship out flop goalkeeper Angus Gunn this summer – two years after paying £13.5million to lure him away from Manchester City.

Gunn, 24, has not played in the Premier League since conceding NINE goals in the 9-0 drubbing by Leicester in October.

Southampton are looking to flog Gunn just two years after signing him from Man City for £13.5m

Saints have circulated the England under-21 international’s name to rival clubs in a bid to gem up interest.

Gunn’s departure would pave the way for Fraser Forster to challenge Alex McCarthy for their number one shirt.

Forster spent the season on loan at former club Celtic and manager Neil Lennon is keen to bring him back on loan next season.

But Saints boss Ralph Hasenhuttl would prefer to keep Forster and offload Gunn.

Southampton forked out £10million to sign Forster from Celtic in 2014.

He has two years remaining on his £90,000-per-week contract with the Saints.

Celtic could now turn their attention to former England No1 Joe Hart.

Hart, 33, has been told his contract with Burnley will not be renewed.

The Hoops, Arsenal, West Brom, Derby, Leeds and Sheffield United have been linked to him.