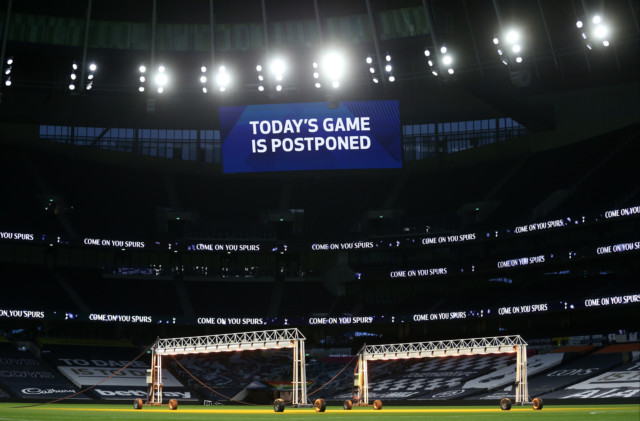 TOTTENHAM are demanding answers from Premier League chiefs after their game with Fulham was called off little more than three hours before kick-off.

But the Prem remained bullish that the current Covid-hit season will continue due to their protocols.

The late decision left Spurs questioning why League bosses waited so long to respond to Fulham’s request for a postponement — as Jose Mourinho’s side are now plunged into a fixture crisis.

But while Spurs fumed, concerns over the security of the Prem campaign grew as:

Tottenham’s frustration intensified as Mourinho, his staff and players gathered at their base to prepare for the Fulham match, which was axed just after 2.30pm.

Prem chiefs explained the decision was made due to ‘a significant rise in Covid cases and a number of players showing symptoms’.

SunSport understands six Fulham players and four staff tested positive, which meant no automatic postponement as they still had 14 or more players available.

But they had the backing of Public Health England and the Prem added: “The Board consulted its medical advisors and the decision to postpone is a precaution taken with health of players and staff as priority.”

Fulham’s squad was ‘retested immediately’ in the hope they can fulfil Sunday’s trip to Burnley.

The postponement adds to Spurs’ fixture problems, already facing a minimum seven games in three competitions next month before the Europa League resumes in February.

Within 90 minutes, City confirmed their squad had the green light to return to the training ground, which had been closed down for a ‘deep clean’ on Monday.

Five players — including Gabriel Jesus and Kyle Walker — were missing after testing positive when Pep Guardiola’s squad trained at their HQ, partially closed ‘in consultation’ with League bosses.

That was good news for the Prem, which is desperate to avoid a new shutdown.

The Premier League has not discussed pausing the season and has no plans to.

A statement read: “The League has confidence in its Covid-19 protocols to enable fixtures to be played as scheduled, and these continue to have the full backing of Government.”

But after this week’s outbreak at Sheffield United — plus Fulham boss Parker and Southampton’s Ralph Hasenhuttl self-isolating — the latest Tier changes put paid to fans on Merseyside and spoiled Marine’s big day on Sunday week.