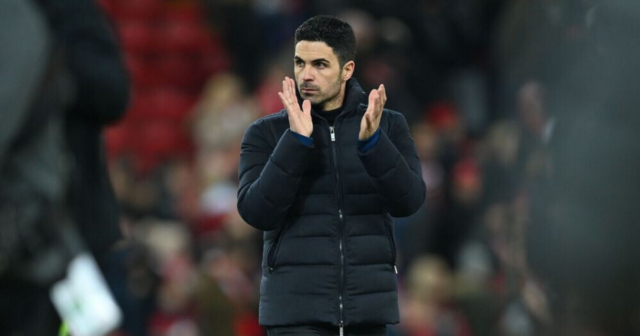 MIKEL ARTETA has revealed the North London derby could be called off as Arsenal are without a host of players for the clash with Spurs.

The Gunners, who were reduced to 10 men midway through the first half of their match with Liverpool when Granit Xhaka was dismissed, valiantly earned themselves a goalless draw in the first leg of their Carabao Cup semi-final at Anfield on Thursday night.

Arsenal now have as many as 11 players missing for the Premier League clash with Tottenham on Sunday afternoon.

However, Antonio Conte‘s men have two games in hand – meaning the North London derby could prove crucial in the race for the top four.

Meanwhile, the Gunners bossed was thrilled with his side’s dogged determination against Liverpool as they restricted Jurgen Klopp’s men to just one shot on target.

The result now puts Arsenal in a strong position heading back to the Emirates for the return leg next Thursday.

“When you come to a stadium like this, I said to them you have to pick players who are happy to go to war with, going to fight,” Arteta added.

“You are going to have difficult moments when you suffer. It is about how you approach those moments.

“If you are willing to help your team, willing to accept that in some moments you are not going to play the game you want then good things are going to happen.

“When you play with that spirit, fight and brotherhood around the team, in the end you get rewarded. That is what happened.”